Thinking Outside the Box

Old Faithful, with over 200k miles, hauled hay with me a couple weeks ago.  Out of the blue, on my way to Columbus for another MRI, something in the fuel system went bonkers.

Decisions, decisions.  Spend a fortune having this big mama towed 40 miles to my mechanic's house, or try to limp there myself.

We limped on what my guess is a failing fuel sending unit.  You see a lot of the countryside when you drive 15 mph.  Two miles from destination, she stalled on a hill... a bad one with a blind curve... we were a sitting duck waiting for a Mack truck to come around the corner.  No shoulder to speak of, unless you call a ravine a safe place to pull over. No choice but to unlock the wheel and coast in neutral all the way back down the hill in reverse.

I sat for a few minutes, at the base of the hill, and had a heart to heart with my  baby girl; she has a lot of hard work miles under her belt, maybe this is a sign that she's come to the end. I know how she feels, in the past three months, I've spent almost every one of my days off in doctor's offices.  The more they poke and prod, the more problems they find unrelated to what we were investigating in the first place. The veins in both my arms are blown from too many sticks and IVs.   Sometimes I want to quit, but I don't know. So, I gave Boss a good pep talk, she fired up and we tiptoed up the hill at 2 mph, she rallied up to 10 mph when we turned down the road to the mechanic's house.  Never give up, that's my girl! 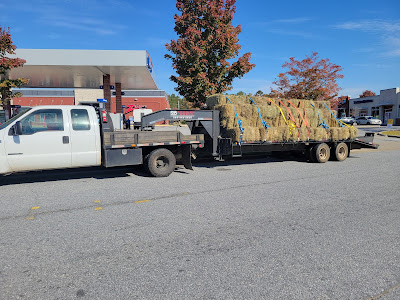 The old green farm truck is also a beast, she looks like she's been beaten with a 2x4, but still she plugs along with over 300k miles. 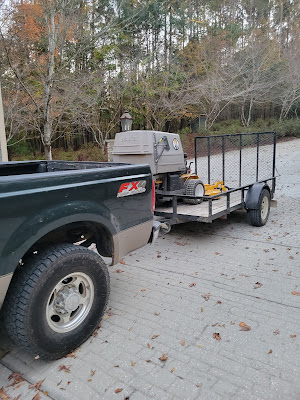 She and I put in a lot of late nights around the farm. 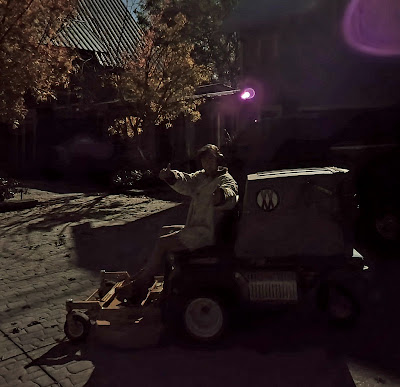 The day after the F350 died, I took the F250 to an ultrasound appointment in Auburn, the day before Thanksgiving.  Upon trying to leave the clinic, she wouldn't start.  It sounded like the plunger in the starter wasn't engaging.  This is how I ruin all my good city clothes: I crawled under her, beat on the starter to dislodge the plunger and finally got her going again. Do I drive straight to the mechanic's house and then not have a vehicle for a week?  The mechanic checked on parts while I idled around in Auburn, neither one of my trucks could be ready before Wednesday.  Because of the Thanksgiving week, staff was off on holidays, friends were off with family, I needed to figure this out on my own. I called every car rental place in a 50 mile radius, all cars rented out.  Discouraged, I opted to drive to the mechanic's house and hope I didn't need to go anywhere for a week.  Then I passed a Uhaul dealership... 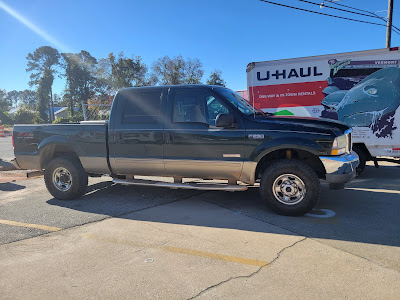 With much finesse, I managed to convince them to let me leave my F250 and rent a van. 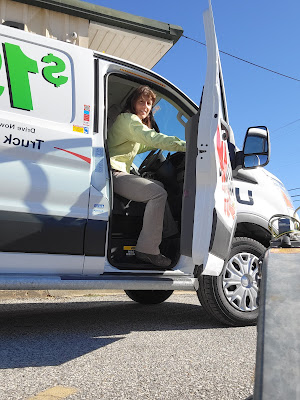 Brand spanking new van! 200 miles on the odometer.  THERE IS ALWAYS A WAY! 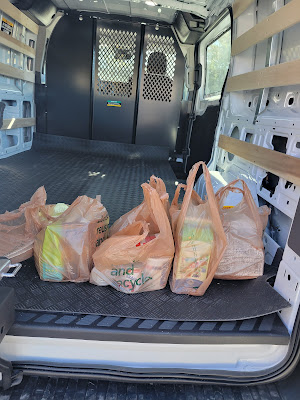 Falling in love with this Ford Cargo van. Handles great and holds groceries well.  If I win the lottery, I'm dropping 40k on a new van, never mind a sports car, this thing is da bomb. 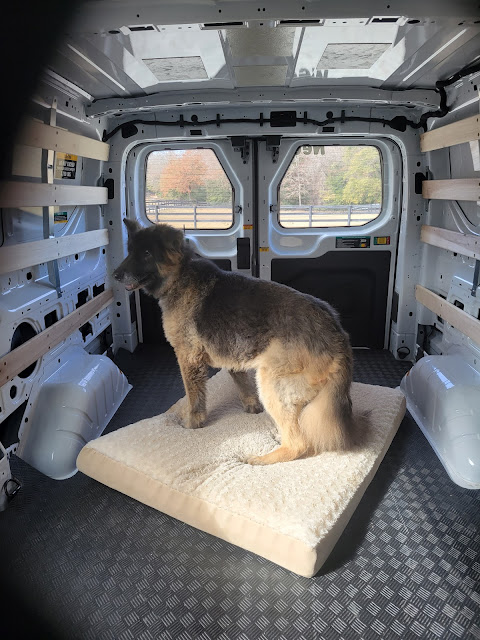 Even ferries with style a geriatric, massive, debilitated German Shepherd from the barn to the house.  But that's a story for another day.

Posted by My Life According To Cole at 4:28 AM

So much has been going on at the farm, yet, there isn't even time to smell the roses anymore (yes, they're blooming into November in Alabama).  One day, I'll catch up and tell you of my brief life as a beekeeper two years ago.

One day, I'll find a way to clone myself, so my clone can go to the barn at 6 AM, meet with the dump truck driver at 8 AM, coordinate orders until 9 AM, plan to finish an erosion area with the tractor later in the morning; and do my daily barn feeding chores at 8 PM... all on what is supposed to be my regularly scheduled day off.

Today, I'm taking 30 minutes to give a blogging shout out to my Neurology Team at Emory Hospital in Atlanta.

I've been struggling in school this semester.  Spending between 4-5 hours a night, 4 nights a week, sitting in class and commuting isn't conducive to maintaining my 3.85 GPA.  My constant headaches and nausea are about to make me go postal.  Well intentioned people have tried to convince me to take a year off from school.  I listen to them with my left ear (I'm almost deaf in that one).  These are the same voices that told me that pursuing my dream to move to America was pie in the sky 30 years ago.  No money, no support, "watch me" was my reply.  Same advice when I had my horse rescue: "stop working so hard", it's what I do, it's what I love.  It's my purpose.  A friend told me that going to graduate school at 50 was a waste of my time, besides, "it's a young man's game".  Hold my prune juice and watch this.  Ignore me, encourage me, but don't get in my way, I will run you over... as  motorists in Atlanta found out yesterday.

Back to Nov 2nd.  I had an 8 AM appointment at Emory with a neuro-opthalmologist.  I was prepping dogs at 3 AM, leaving early to avoid traffic.  Hit it anyway.  Accidents all on I-85 had me hopscotching through Atlanta back streets for an extra hour.  Then, 30 minutes to find an underground parking to fit my tall and wide girl. 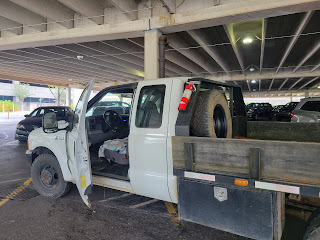 Instead of being an hour early for my appointment, I slide up to reception like it's first base, sweaty, flustered and 30 minutes late.  With 4 hours of tests ahead of me, I wouldn't have blamed them if they'd turned me away. The office manager took pity on me.  I had called at 8:01 to tell her to look out the tower window, I was here, big flatbed circling around was me!  Don't cross me off the list.

So, here's the verdict:  I'm brain damaged.  I don't believe the good doctor was prepared for me to laugh, but he doesn't know that I have an ex-husband who could've told me that for free.

The purpose of this visit was to understand how my brain tumor was causing my hearing loss and vision problems.  What the optic nerve specialist found instead is that the tumor isn't causing the pressure on the left eye nerve, it's altogether something else. Joy.  Another problem; actually 2 new problems.

Dr. Kedar asked if I'd ever had a concussion.  Well, I've taken some nasty spills off horses' backs, had some epic mountain biking wrecks, had my head smashed and jaw fractured with a 2x4 when I was repoing cars in my 20s, fractured my temporal bone back in 2015 by an accidentally self-inflicted blow with a steel rod (I'm gifted), and my ox Tommy broke my nose when he accidentally head butted me in 2018... Flynn said my left eye buried itself by my nose and it never quite went back to being even semi-straight. So, after consideration, my answer was a simple yes.  He found that the damage from multiple concussions is what is causing my headaches and quadruple vision in the left eye.  Not a double vision where the letter you're looking at has shadows of itself behind it, no I see 4 clear copies of something when looking dead at it.  You have no idea how giddy I am when I hit the keyhole with my first stab.  I sometimes take pictures of my homework to blow it up jumbo size so I can make out the numbers. 10,000 can easily look like 1 million to me.  Nothing can be done for it.Lifelong issue now. He did however show me how to reduce the pain and line up my vision so I can see a bit better. 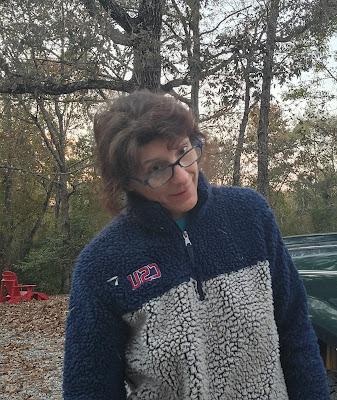 I wish I were kidding.  I don't know how this is working, but bending and twisting my head down is almost instant relief.  I've always slept like Superman on my belly, 6 months ago, I started to force myself to sleep on my back for better posture.  This is why I've been spending sleepless night staring up at the ceiling with a throbbing headache.  Last night, I flopped over on my belly and crooned my neck to one side... slept solidly.  I don't intent to walk around like Quasimodo the rest of my life, but I'll accept 'permanent brain damage' over growing brain tumor any day.

The other double vision is caused by something funky going on with the cornea of my left eye.  My next Emory appointment is with the cornea specialist... I'll need a special parking pass if this starts to be a bi-weekly excursion.

I left Emory almost in tears.  Tears of gratitude.  I've grown accustomed to not expecting miracle solutions, so having more facts and answers is good enough for me.  To celebrate, I hopped over to my favorite store: Whole Foods and did some damage to my credit card.  I feasted in my truck for half an hour, livened up by the prospect that even though I'll never be headache free again, I have some coping mechanisms now, corneal remediation in December, and potentially good nights of sleep ahead of me. 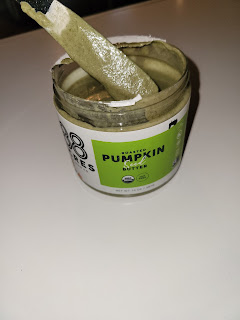 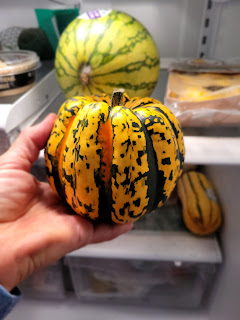 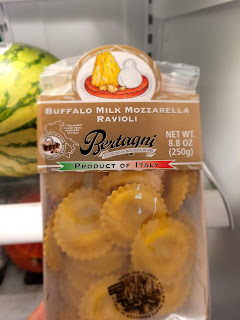 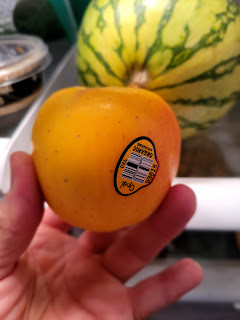 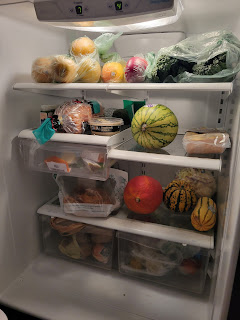 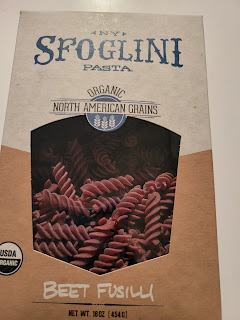 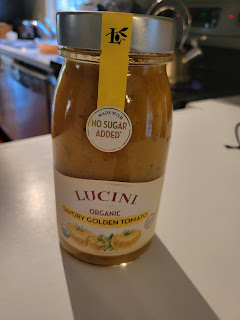 Upon leaving, I checked my GPS, I'd missed my chance to get out of Atlanta.  If I hadn't spent all that time at Whole Foods, I could've been South of where an accident just happened, blocking all lanes of I-85... or as my calculations showed, I could've been in it!!!  My team of guardian angels working overtime today. When I eventually passed the scene, it was gruesome: a crane was trying to pull a truck out of a ravine and two mangled cars were sitting on a trailer.  Parts of them.  Both had been flattened and one had been cleaved in half.  The other half still sat across the interstate with a sheet on it. Other wrecked cars were lined up on the side of the road.

Guardian angels earned their stripes today for sure.  Up the road on I-85 in downtown Atlanta, traffic was at a snail pace around an underpass.  I saw it coming and slowed.  The car behind me slammed on his brakes just in time.  The guy behind him didn't make it.  I felt a jolt, then the chain reaction started.  It was like watching a horrible slow motion film in my rear view mirror and I couldn't bail left or right.  When the car ahead of me pulled up, I crept forward, so did the car behind me... not of his free will.  He was on my hitch. 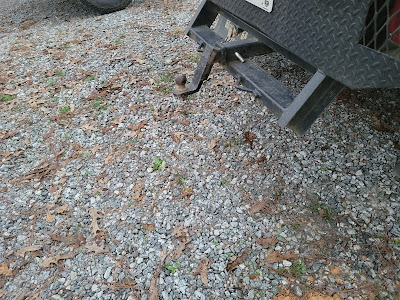 We didn't figure all this out until he locked his brakes and I drove off with his bumper.  He waved me on to keep driving, I could still hear the slamming of cars happening behind us. So I did. I swung onto the HOV lane, half on the shoulder of the road, back into traffic, weaving, honking, I forced my way out of there.  I need a tank to drive in Atlanta.  Maybe a bus.

Haven't told you either that there's 8 dogs in my care, plus #8 is pregnant.  I think I do need a bus.

Posted by My Life According To Cole at 8:29 AM