Firstly, the non-news:  I'm trying to get my weekly mileage over double digits, but it's not been working out for me.  I ran 6 miles a week ago and my back protested for 3 days.  I'm a hostage in my own body.

Cole isn't faring any better.  His surgically altered back leg is fully rehabilitated.  Dummy's recently injured front leg isn't as cooperative.  He has a support bandage he's supposed to wear all the time. 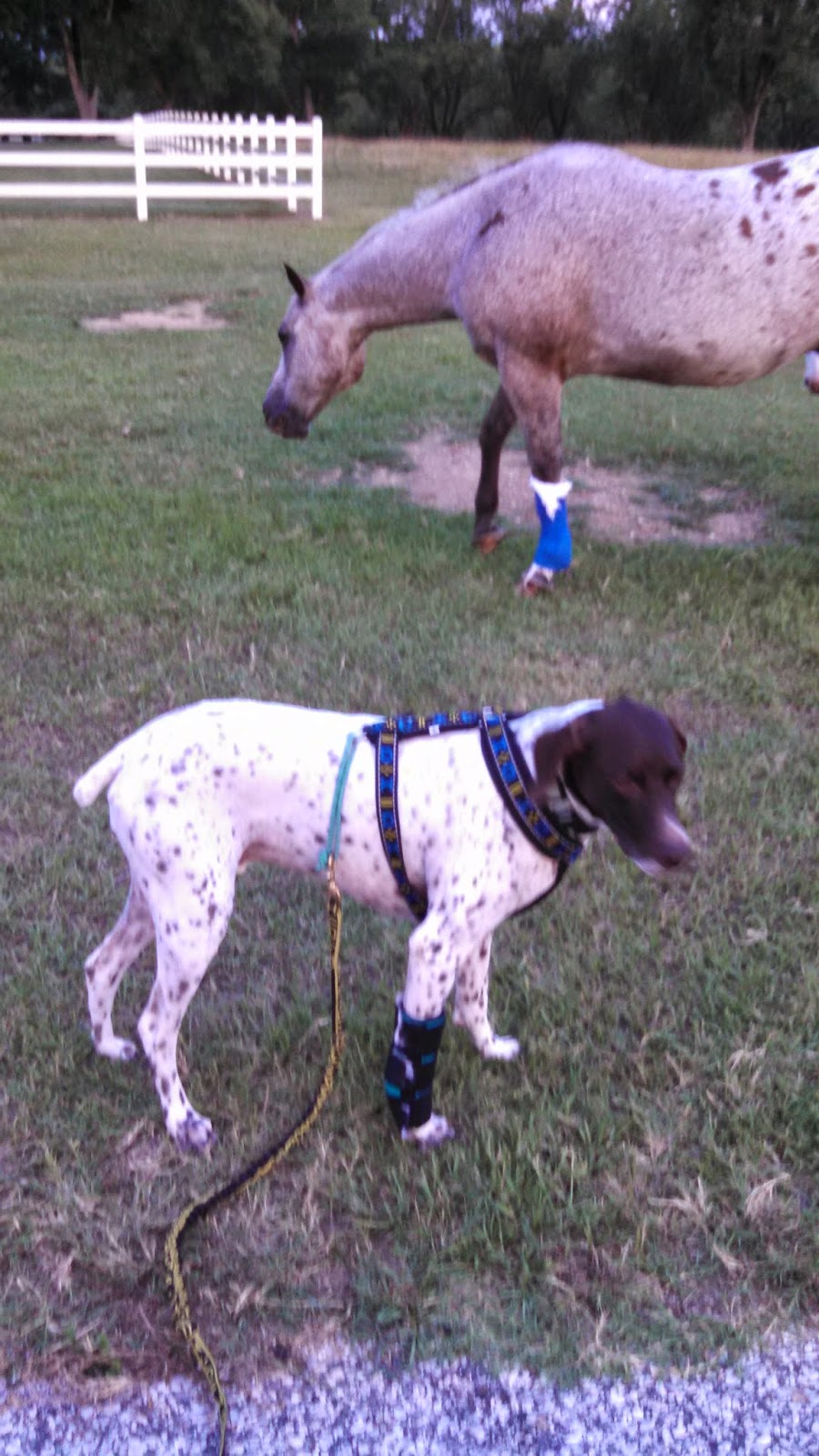 This is what happens when he's been without it:


The other cripple at the farm opted to fare worse before showing signs of improvement.  Axel sprained his deep flexor tendon.


This would be best resolved with icing, bandaging and stall rest.  But, there's no room in the barn.  Spring has sprung late at the farm this year:  the nanny goats have begun kidding. 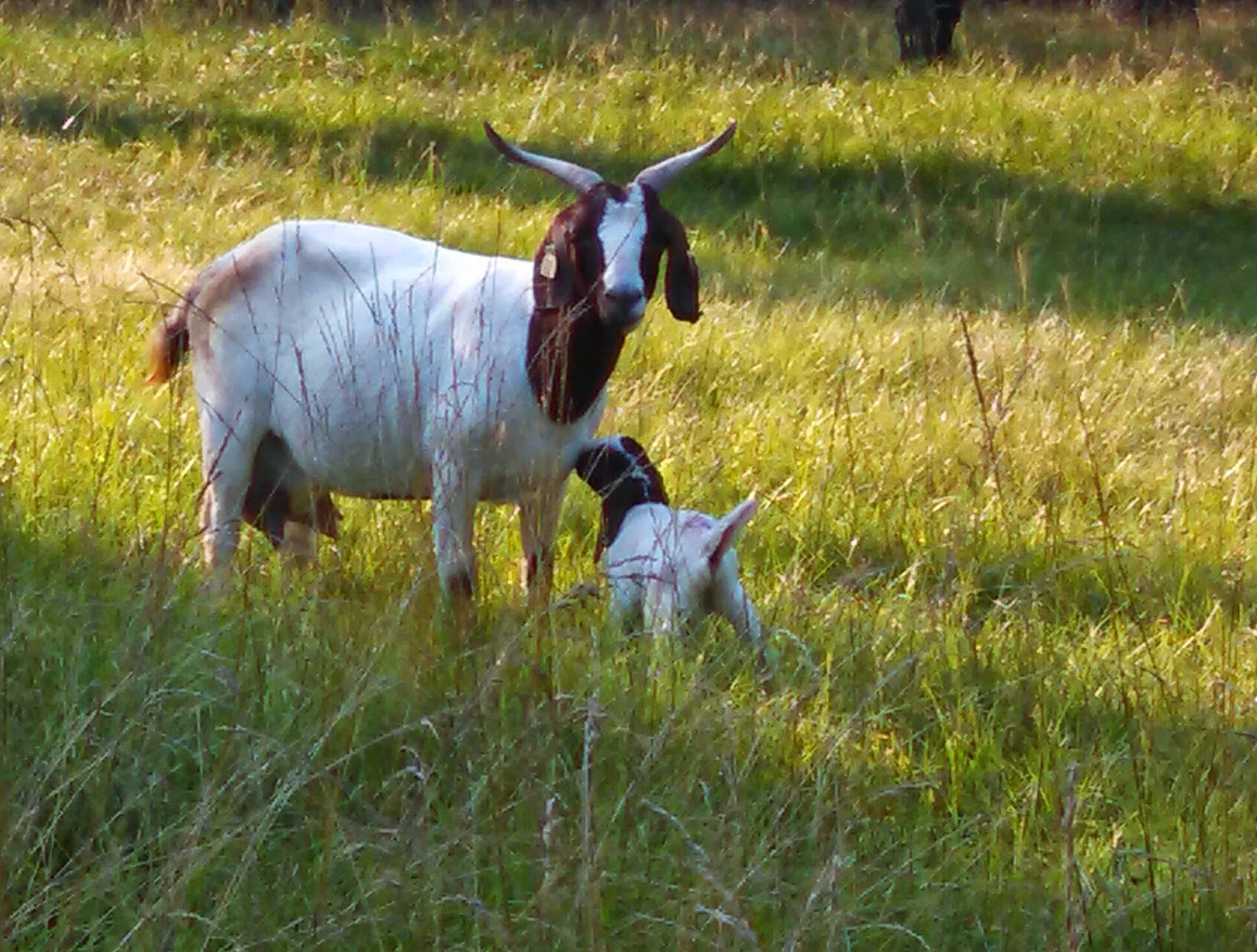 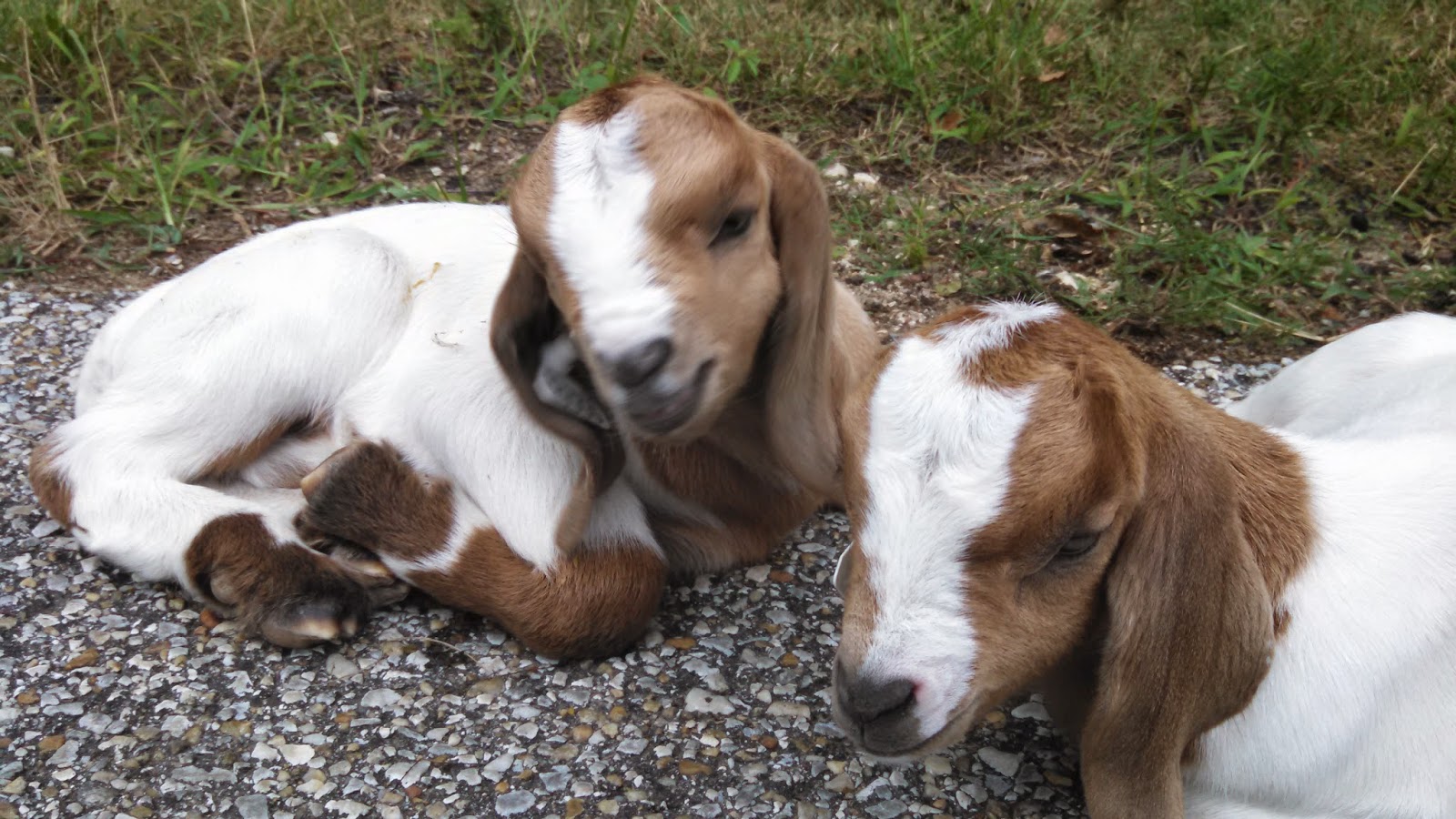 Goatlet:  n. a Smitty-ism, should be used instead of 'kid', suits them better.

Therefore, the best I can do, is to ice Axel daily, give him Bute (anti-inflammatory), wrap the leg for the first two weeks and hope for the best.
Oh, and turn my backyard into a convalescence stall. 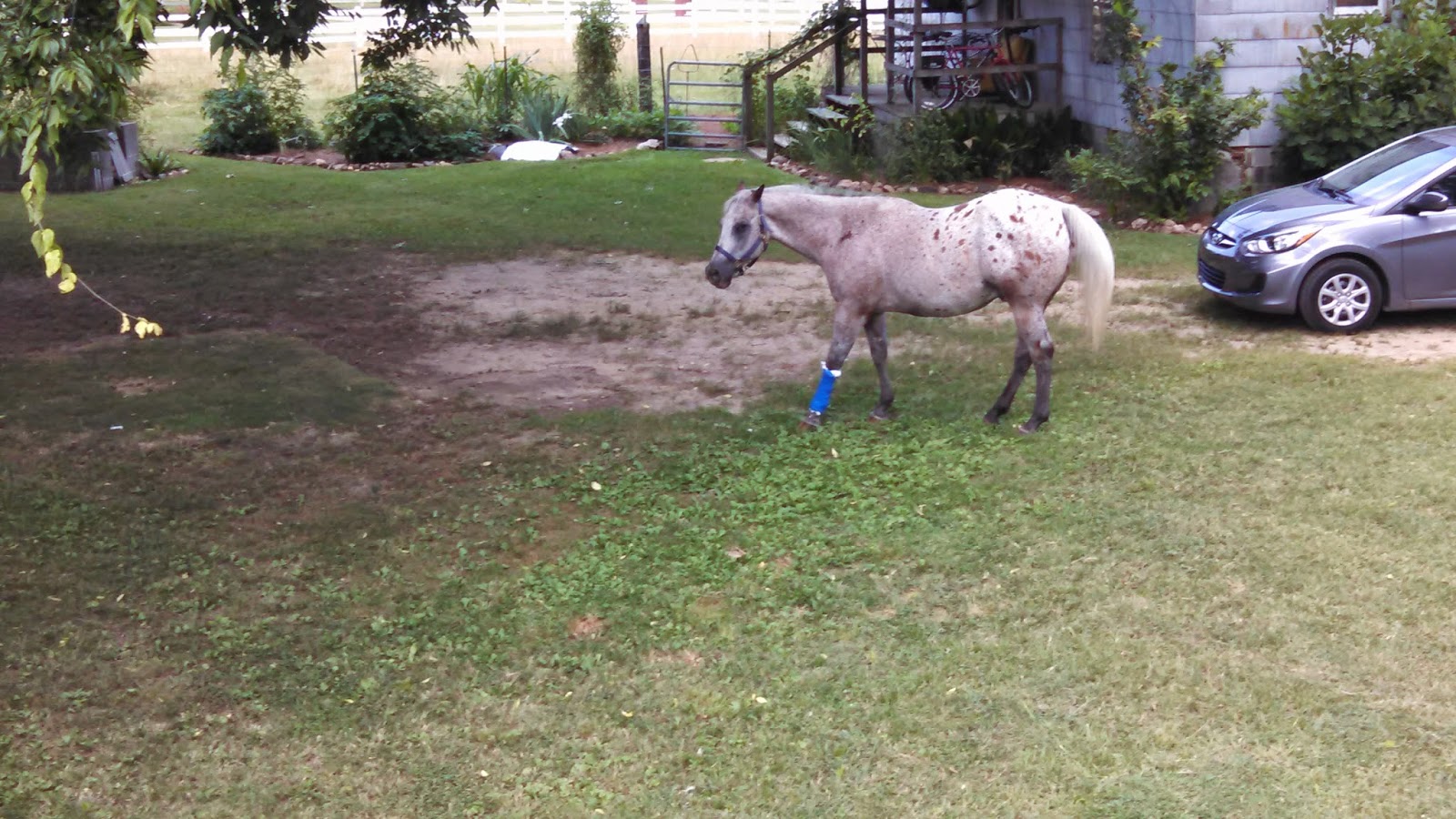 Axel mowed the lawn all day while I worked on my horse trailer a couple Saturdays ago.

His lameness has altered his gait, causing him to strike the back of his front foot with his back foot.  Prolonged bruising of the hoof bulb caused a coronary band abscess this week.  Bad blowout: 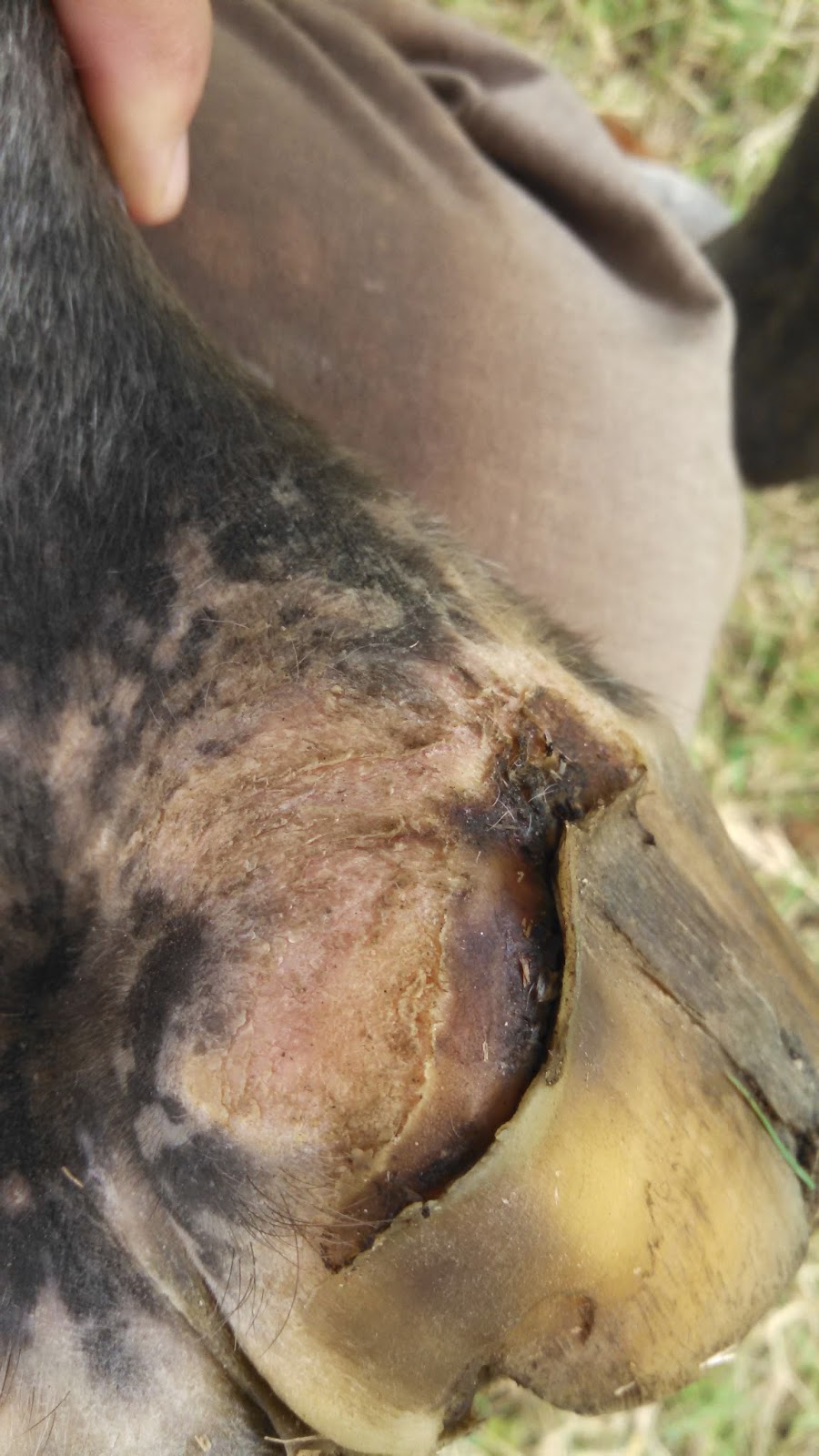 More soaking required, this time with warm a Epsom salt solution.  Axel can be a temperamental diva.  Twice now, he's arbitrarily decided that the soaking procedure was life threatening and should be ceased by rearing up and flying off backwards.  Princess almost ended up on the hood of my car the last time.  Now, he gets lassoed to a tree with no more than 2"  play in the rope.  Bad patient... 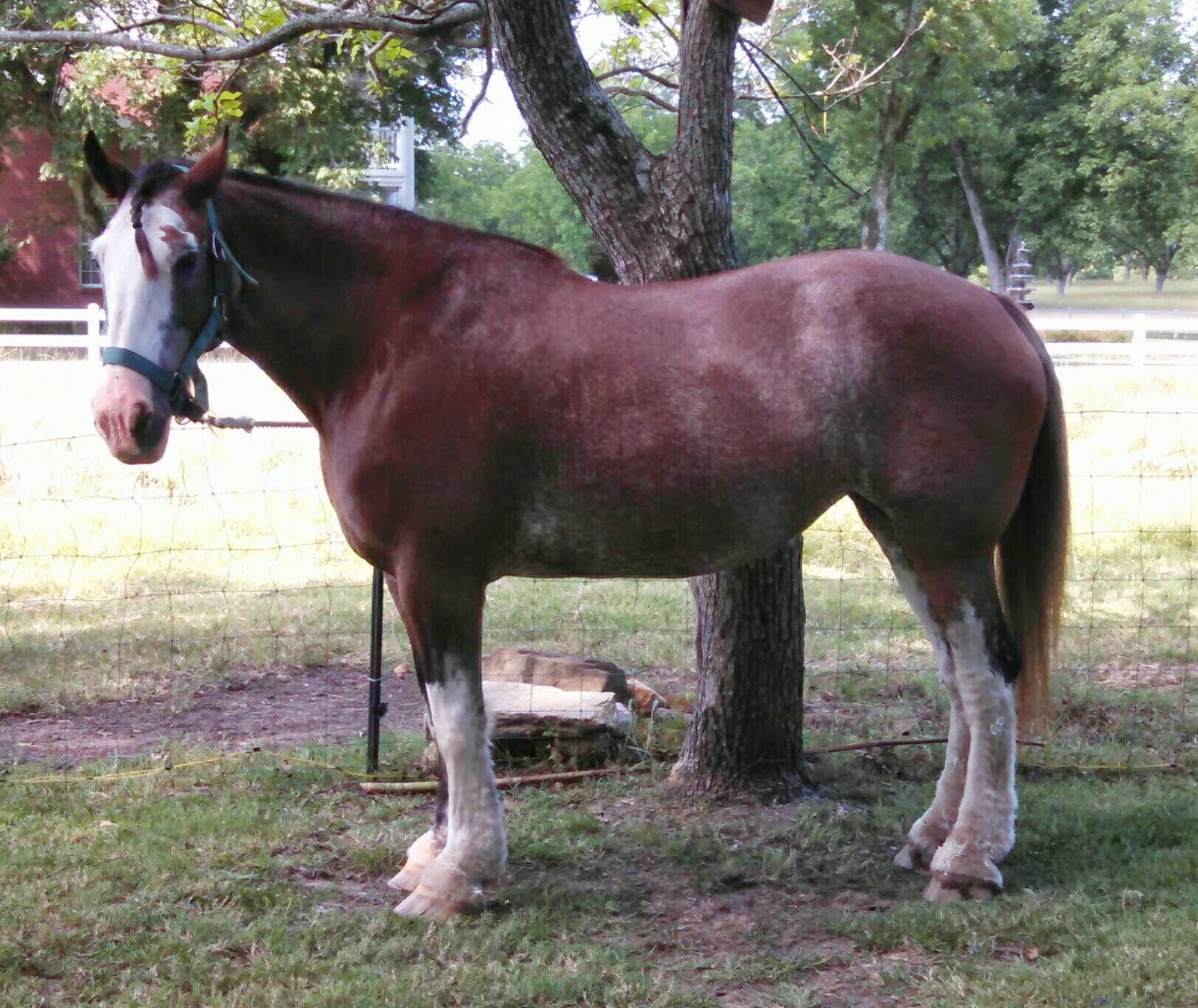 Sweet Bella.  She has a chronic skin condition that required clipping, scab cleansing, all sorts of un-pleasantries, yet she rarely fusses.
My draft horses have spoiled me, so I try to return the favor.  I bought a watermelon to share with the chickens.  The horses attempted to steal the half I was carrying out to the chicken coop. 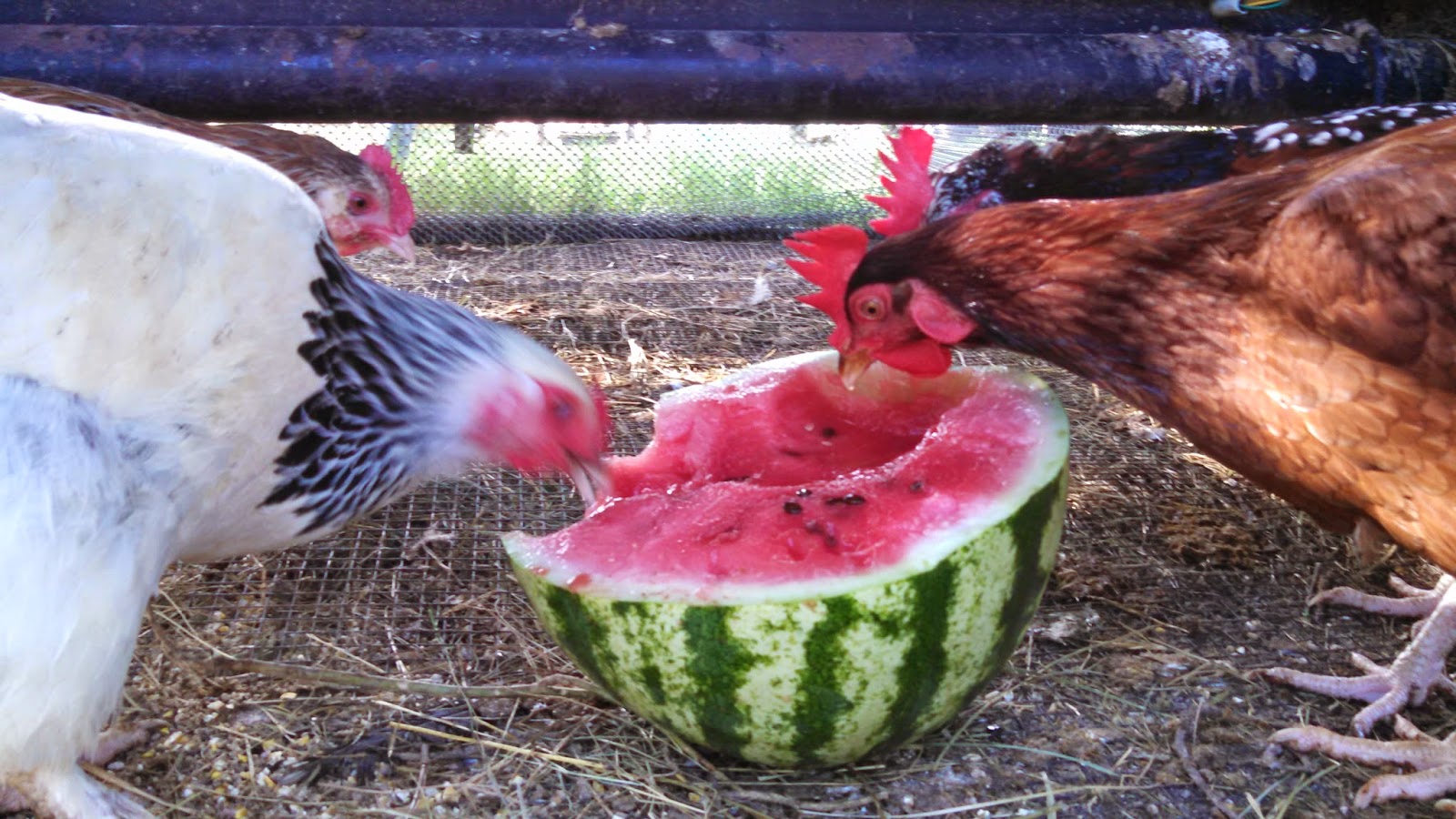 The hens were mildly offended by the big bite marks taken out of their prize.
Instead of eating the other half, I served it up to Angus.  You've never lived unless you've watched 2000 lbs slobber over watermelon.

Posted by My Life According To Cole at 9:23 PM 3 comments:

From the Penalty Box

I've seriously reprimanded myself.  During the past few weeks, I've been recuperating from a back injury curled up in bed with my laptop.  For three years, my pledge to myself was that for every four documentaries, I could watch one show purely for entertainment.  Most times, I hold on to a DVD for a month before I have a chance to watch it.  But, with the mail-in center  for Netflix in Birmingham,  a DVD mailed in one morning results in a new one by the next day... causing me to seriously overindulge the last two weeks.


Therefore, the diet has begun:  restrictions on my online time and I cancelled my Netflix plan. Take that you bad girl!


I hadn't posted anything on my blog in a couple of weeks because the Blogger site has decided to block me from uploading pictures.  Technology is dastardly. Two weeks of upgrading operating systems, defragging, compatibility view changes... to no avail.  My amateur techie work will probably end up costing me double the usual shop fee when I bring my laptop to my repair guy today!


Before I lose my laptop, let me highly recommend a documentary and a TV series.
What Plants Talk About is a Nature documentary that is absolutely fascinating.  Did you know that big daddy trees in the forest help feed their own offspring?  I'm not telling you how, you'll have to watch.  I might not be able to use my chainsaw for a while...


The 12 part TV show is a political drama/police mystery called Salamander.  It's set in Brussels and is in Dutch and French with subtitles.  Spine tingling suspense and beautiful streetscapes.  I've been to Brussels twice, but almost a decade ago.  Watching the show, I felt like I had my backpack on again and I was marching through town trying to see every inch of it, every embassy, every statue.  Ahhh memories, if that's all I have left when I get old, at least they'll be good ones.

Posted by My Life According To Cole at 5:36 AM 3 comments: 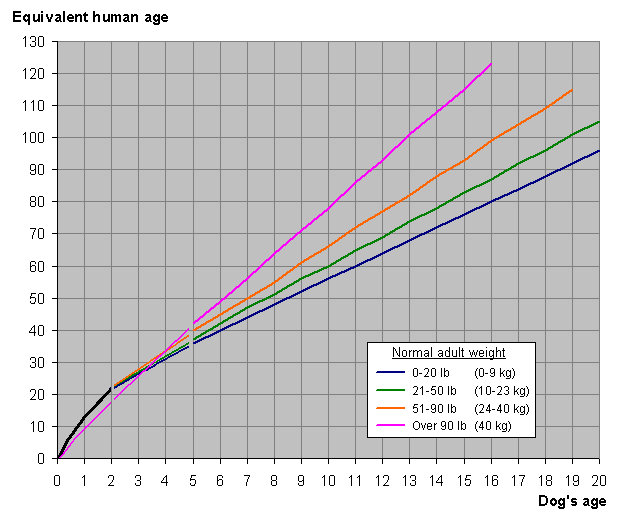 Or to look at it on the bright side:  lucky number 7.  After the year he's had, he's due a better fortune.
It's tradition that on his and my birthdays, we're on a trail somewhere.  As I'm working through the long weekend to catch up on work, my grand plans to take Cole to Roosevelt State Park were canned.
I think he was just as happy with an hour of squirrel hunting this evening. 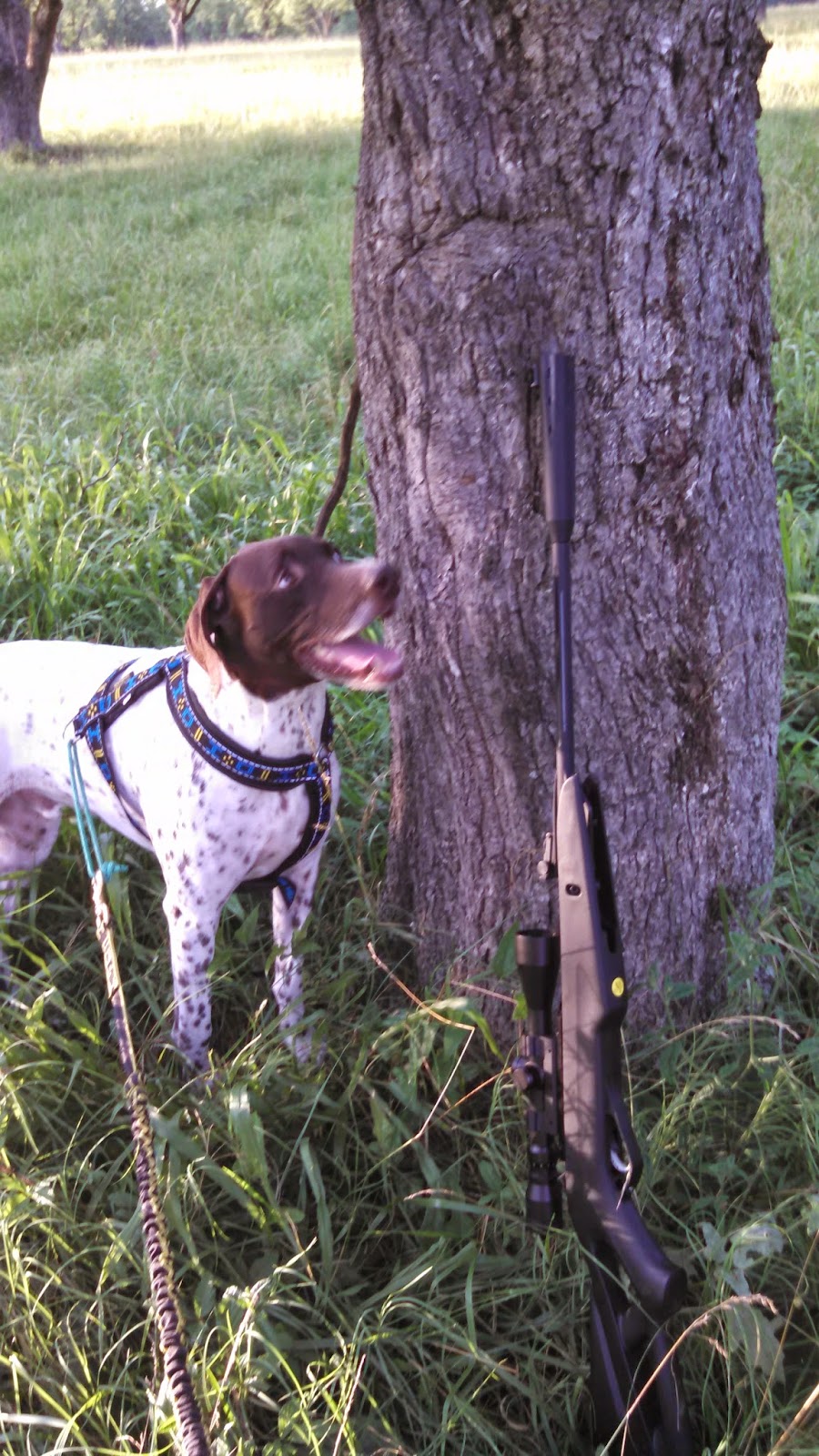 We came back to meatloaf straight out of the oven. 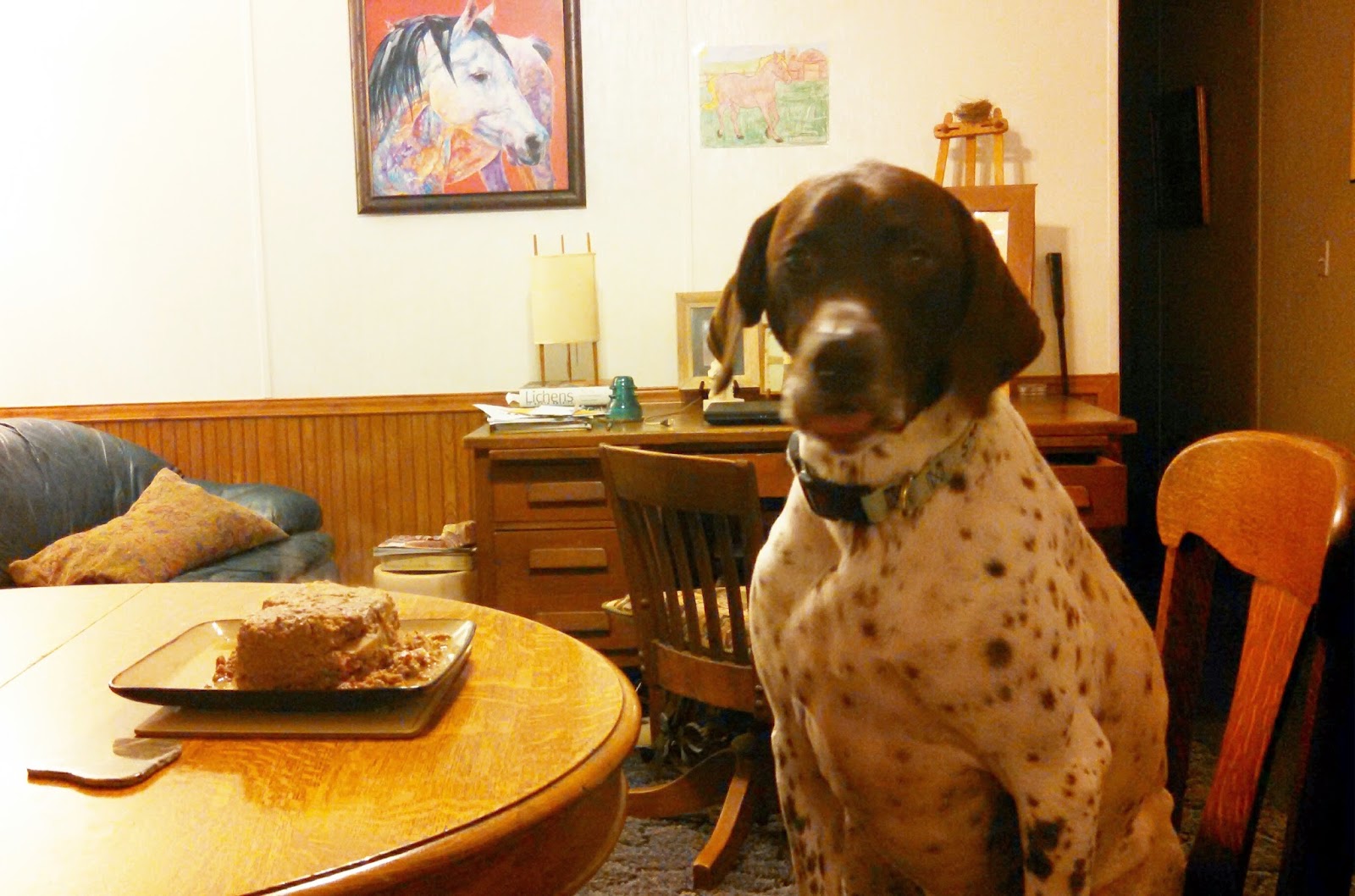 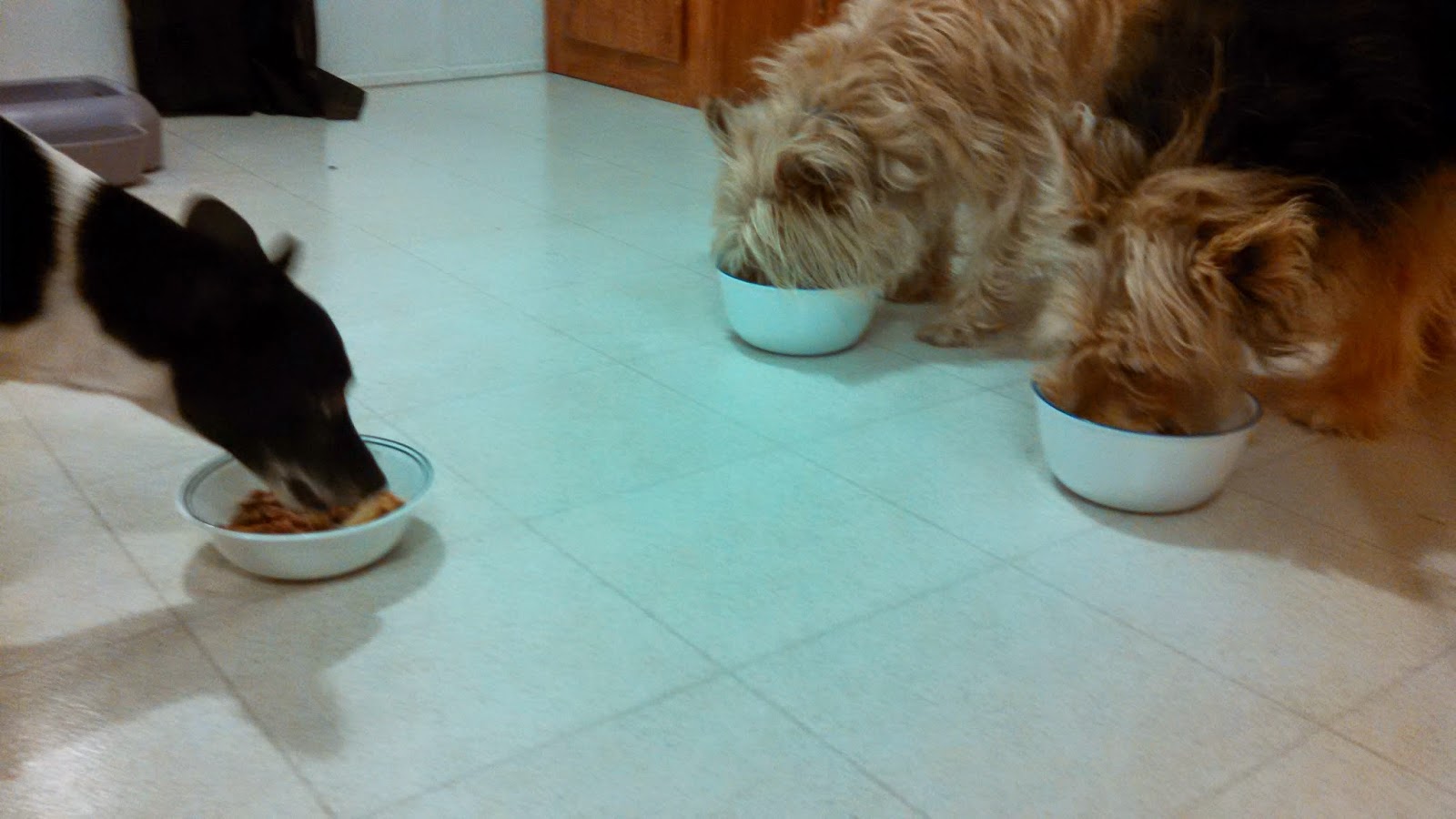 Snouts in the trough.

If you think about it, Cole ages 1 year for every 2 chronological months.  Time together is precious. 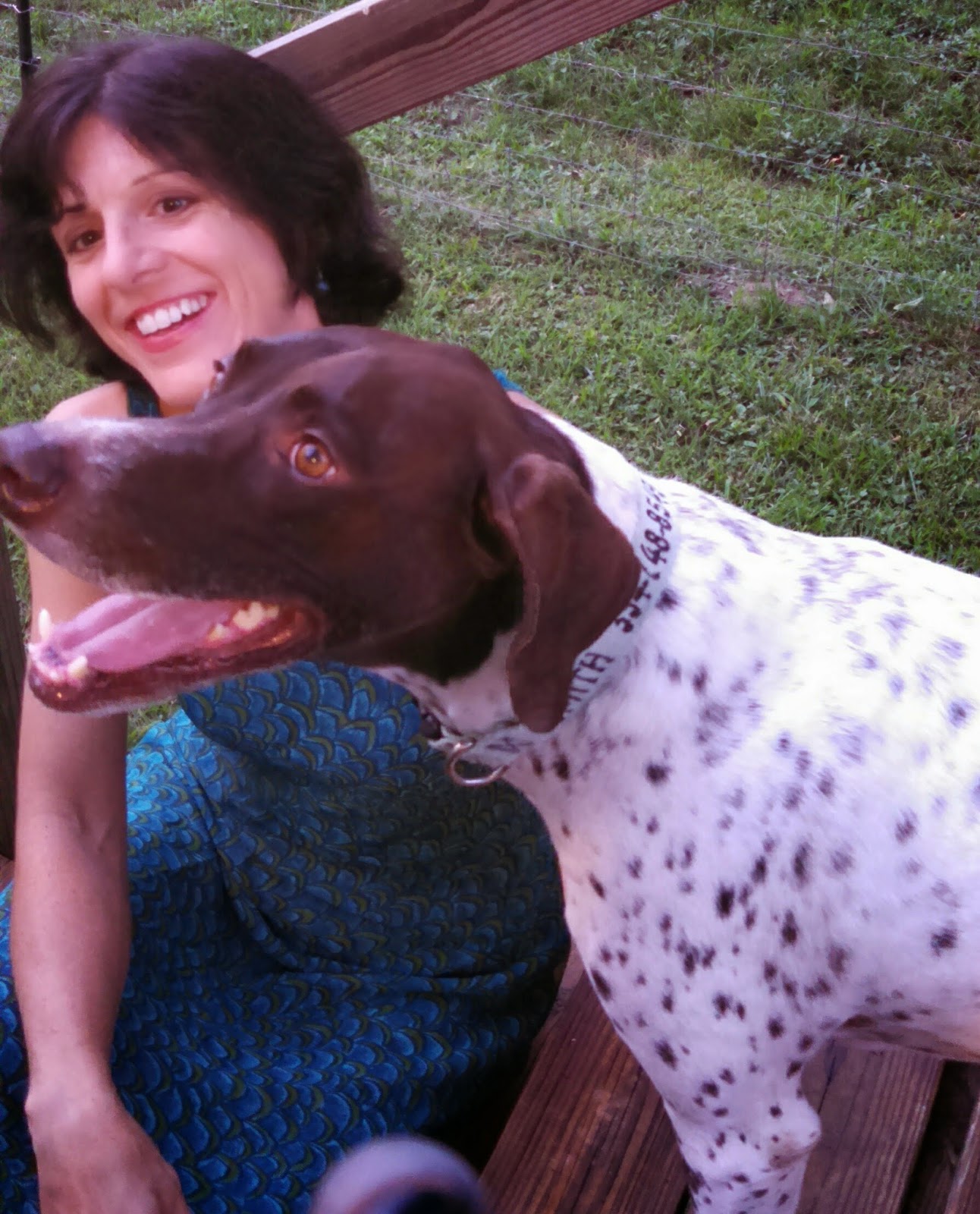 The occasion called for a trip to the ice cream parlor, with all four dogs.
I only wanted one good picture of us. Is that too much to ask? With the 10 second delay on my cell phone camera, you never know what the picture will end up looking like.  Out on the deck, Cole was preoccupied scanning for squirrels in the trees. 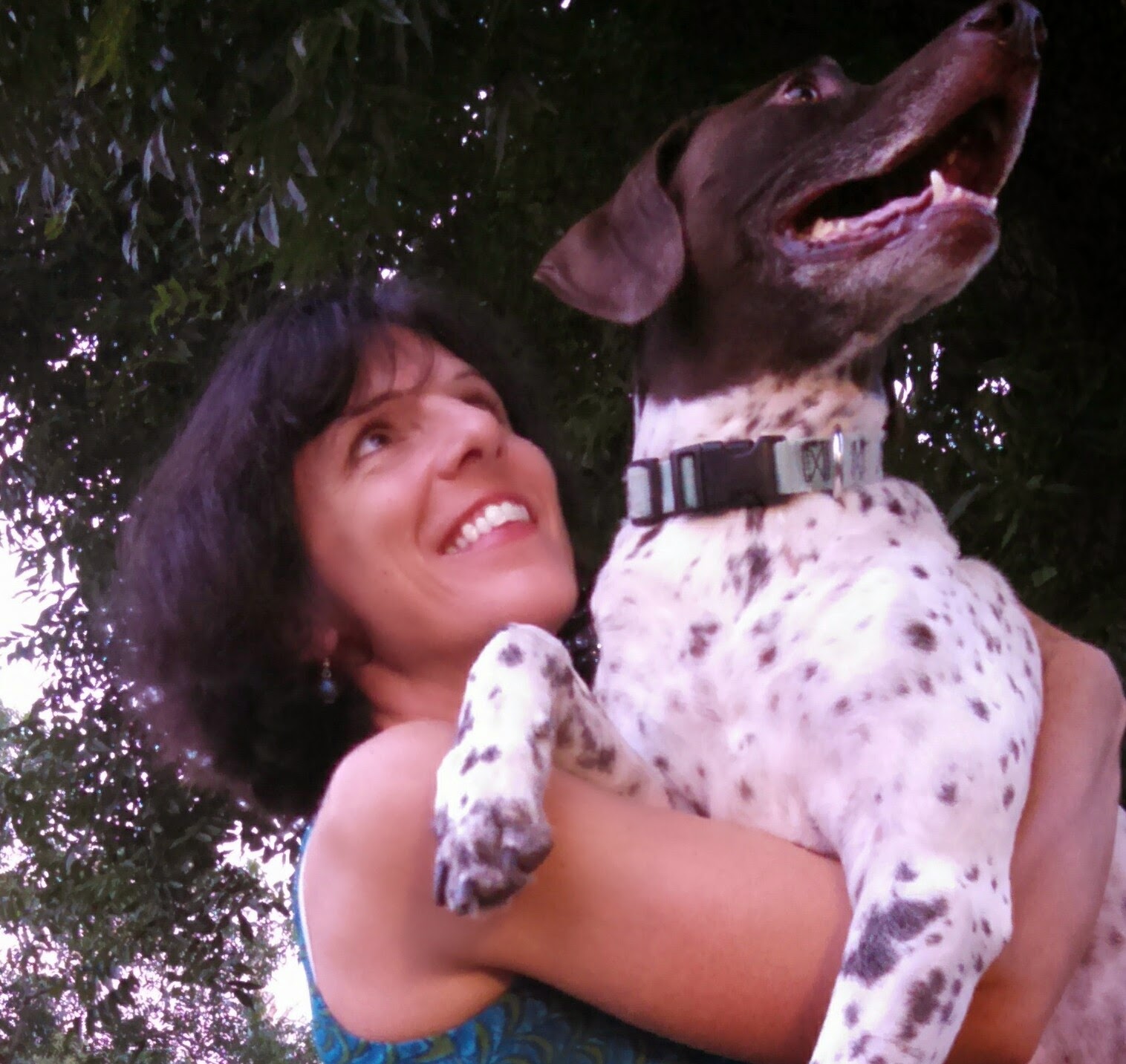 Still focused, he's assuming I'm giving him a boost up the tree.

Moved inside.  Things got goofy. 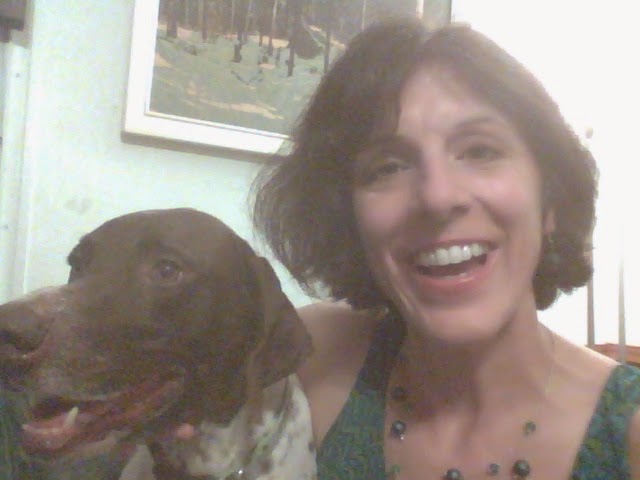 A little drunk off my second glass of chocolate milk! 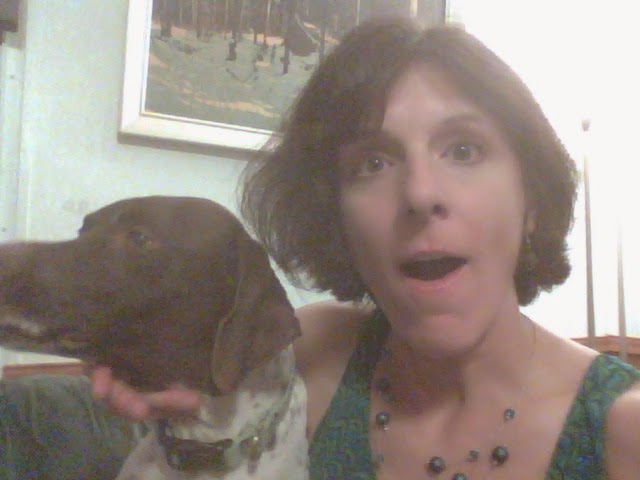 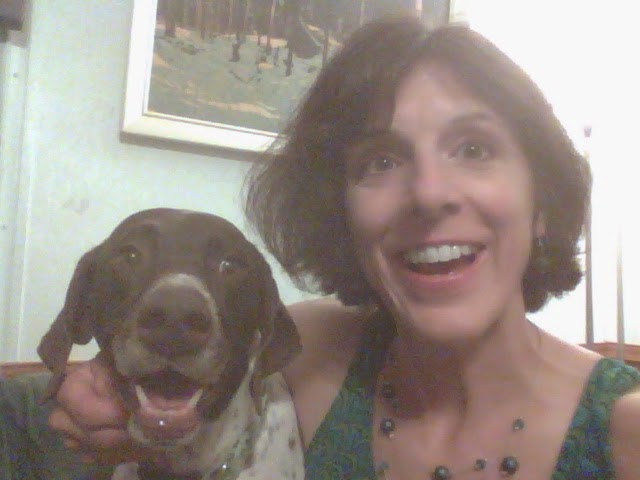 "You're making my eyes water, Kid". 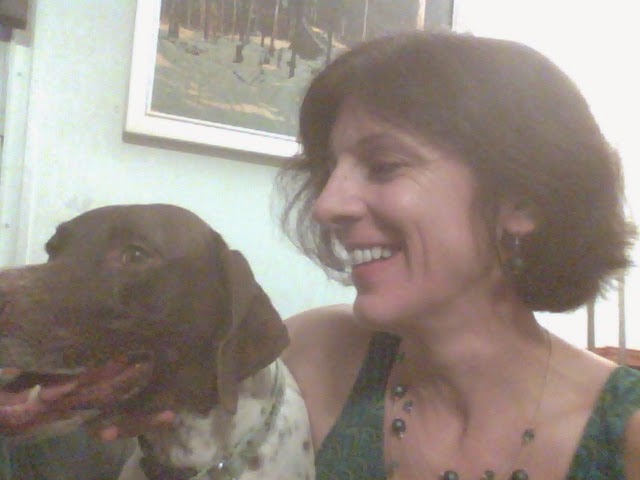 "You're staring at me.  I can feel it".
Never got the good picture I wanted, but had too much fun trying!
Ended the evening by bringing Wilbur his beetles. 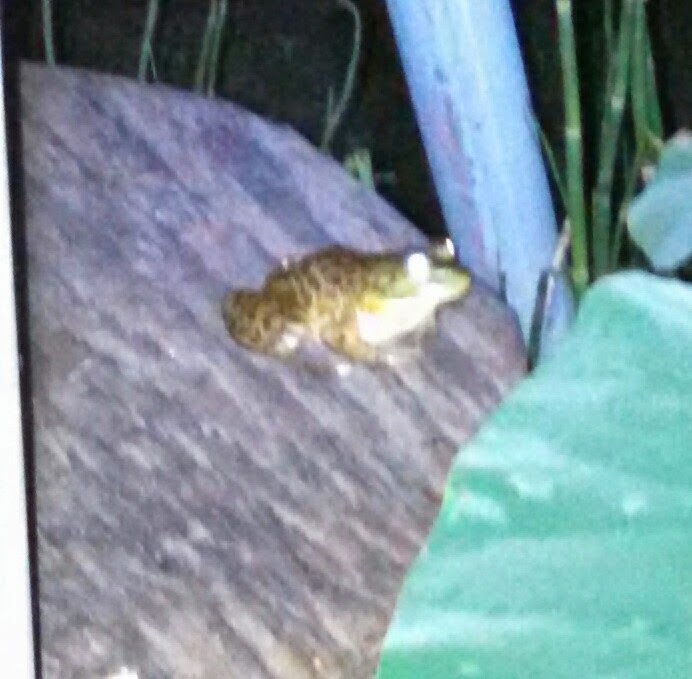 I have cause to celebrate twice this week.

Happy Canada Day to my Canadian family and friends! 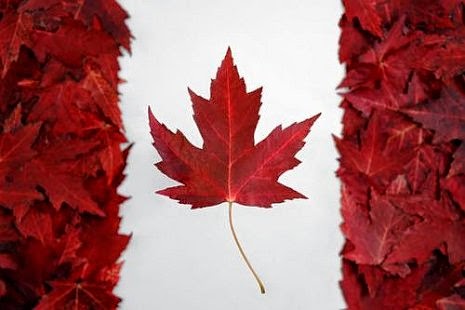 I was belting out some off key renditions of O Canada at work yesterday.  I even met a fellow Ottawan at Earth Fare.  Hard to mistake her for anything but a proud Canuck with Canada on her T-shirt, even her baby's pacifier had a maple leaf on it.

Reconnecting with my roots has been a theme these days.  Through the magic of Facebook, I recently found my childhood best friend, Anne-Marie. 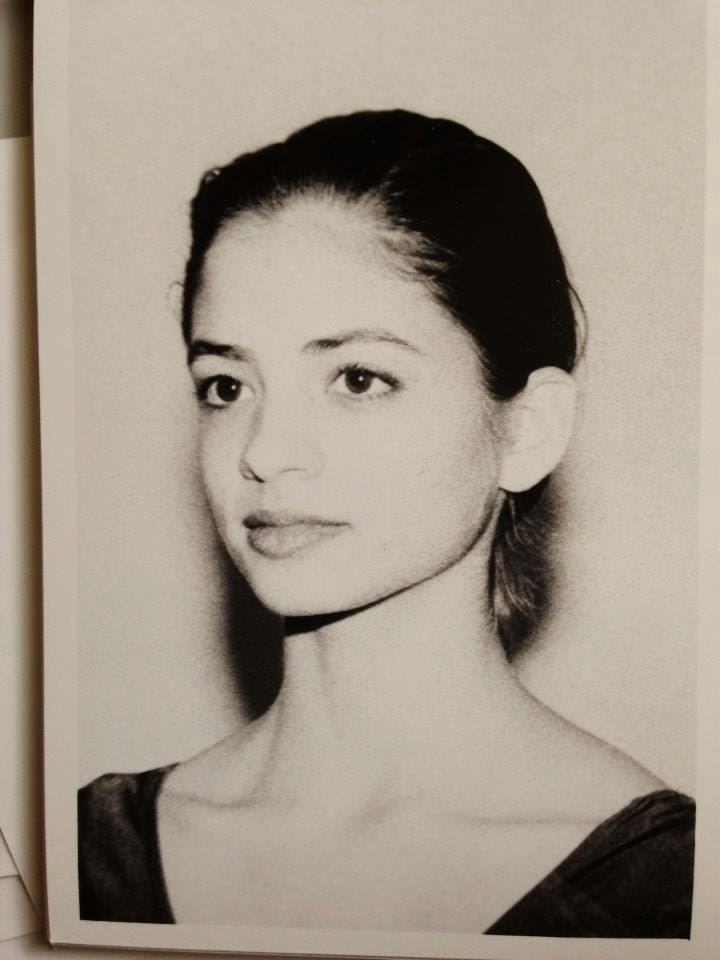 Her passion in high school was ballet.  My bet was that she would end up dancing with the Royal Winnipeg Ballet. We lost track of each other right after high school.  She thought I was heading to Carleton U for Architecture.  Instead, I headed to the States to study agriculture and she went about her business getting an MBA.  After being a stockbroker, Anne-Marie decided to begin the second act of her career and became a chef and a college culinary instructor. 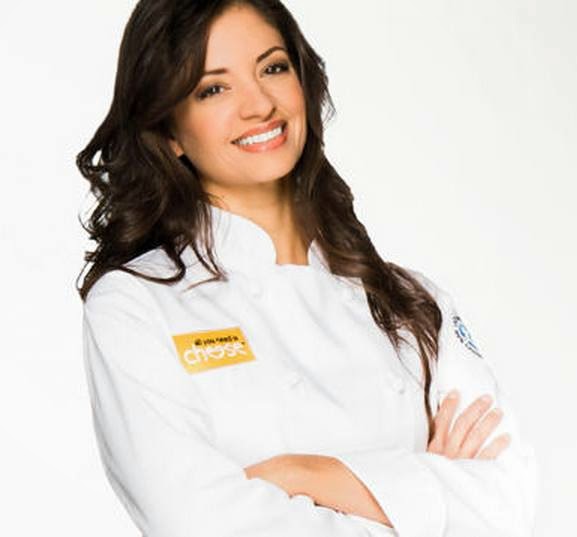 Always driven and disciplined, I bet she has a third act up her sleeve.
This Fall will be my first time back to Canada in four years, only fitting that best buddies (even after a 27 year hiatus) will be together again.  Serendipity!

It's been said that the person you should become is the one you were at 15 when your passions were clear.  For me, it's always been about animals and books.  Seeing this photo that Anne-Marie had of us at 15 made me laugh. Everyone else on the bus is chatting and we're engrossed in our books. 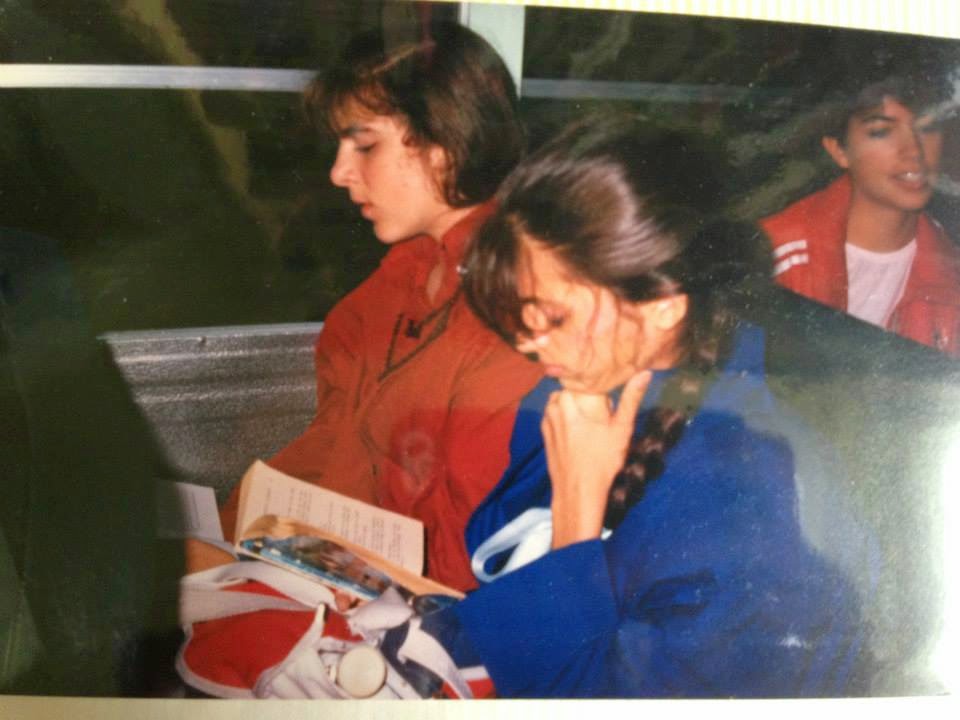 In honour (notice Canadian spelling) of Canada Day, I want to recommend a fine Canadian author.  Louise Penny has written a series of detective mystery books set in Canada. 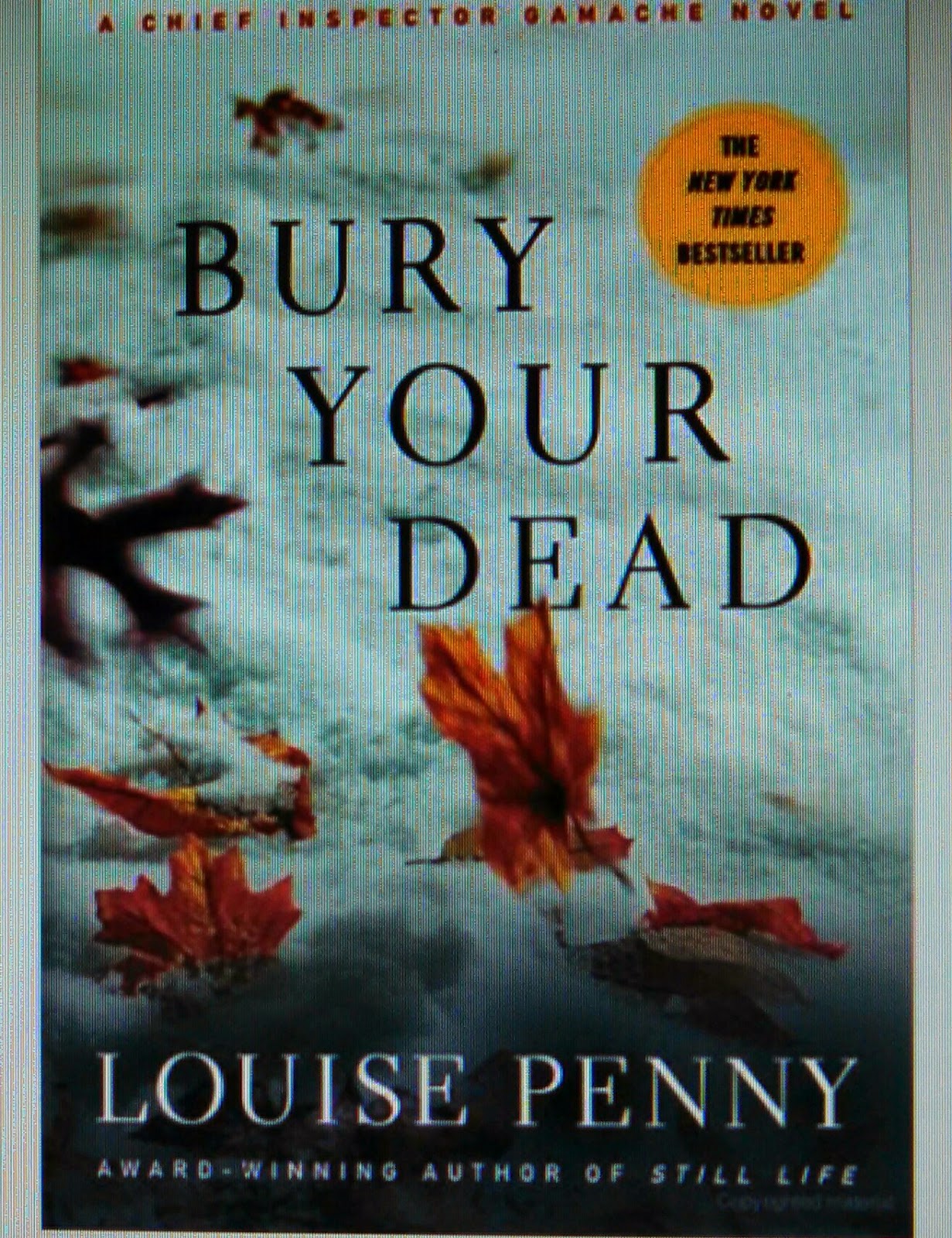 Bury Your Dead is a contemporary novel set in Old Quebec City.  A fabulous read.  I could spend the rest of the Summer cradling her other ten books...
In honor of my adopted country, I present two books from an Auburn University entomologist, Dr. Mullen, both books concern Phillip Henry Gosse's year in Alabama in 1838.  Gosse was an Englishman who had worked in Canada before moving to Alabama to become a school master. One book is of his watercolors Entomologia Alabamensis. 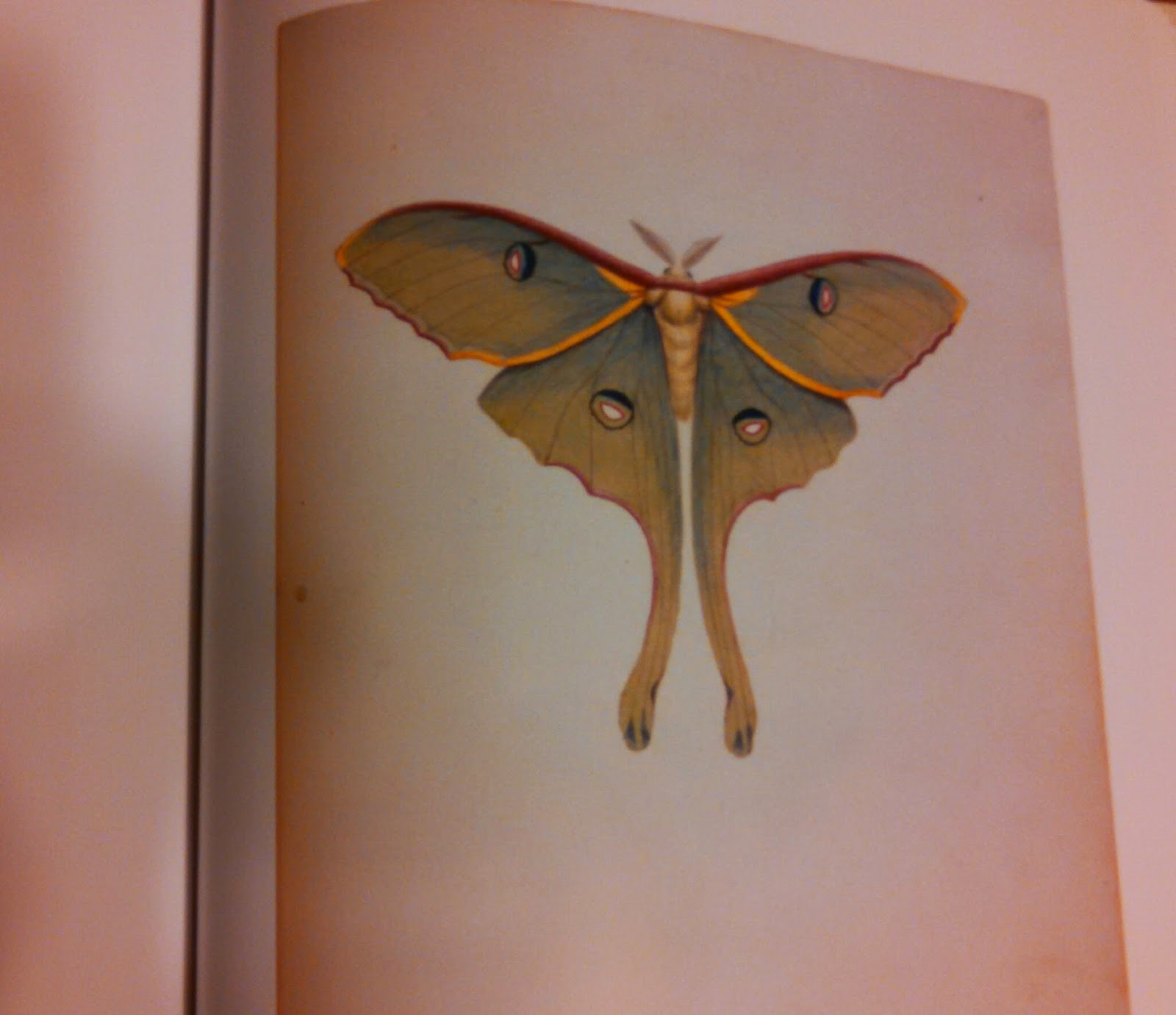 The other is a collection of letters he wrote detailing the flora and fauna he discovered over the course of 8 months in Dallas county, only two counties from my Lee county.  Written 176 years ago, I could be standing there beside him when he describes his euphoria at the discovery of Actias luna (Luna moth), he even compares back to his explorations in Canada.  All these strange southern bugs and plants that I've delighted in studying, he had the same adventure two centuries ago. 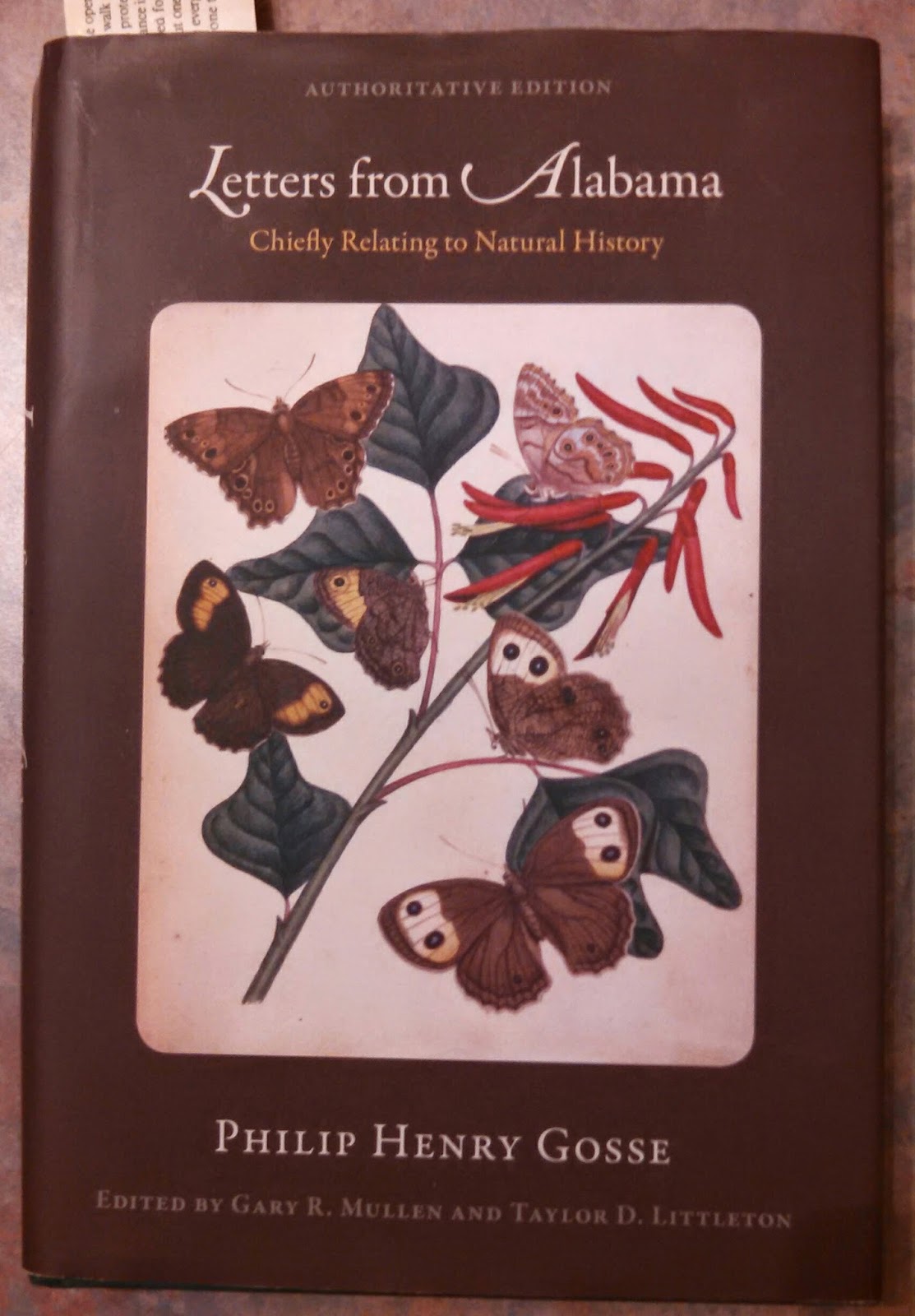 It would seem he did more exploring than school teaching, using his pupils to gather specimens for his entomological collection.  He had minions!  Gosse's descriptions of agricultural practices make me shudder.  Rather than clear cutting forests for the preparation of fields, the cotton farmers girdled trees, killing them within a year, but also wasting the wood.  The following season, the slaves planted cotton in the devastated wasteland.  Gosse describes the danger involved for the slaves working among thousands of dead standing trees.
One experience that I can only live through his eyes is of hunting on horseback in a virgin forest.  Gosse was able to pursue deer at a gallop through the forest. He goes on to explain that second cut forests are choked by brush and terrible vines.  You don't say, that I have plenty of experience with!
Happy July 4th to all my American friends and adopted family members! 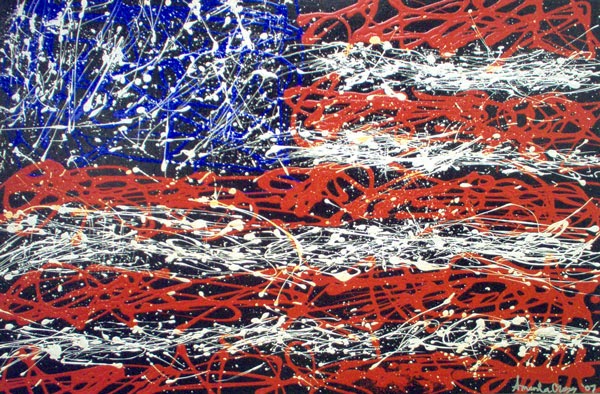 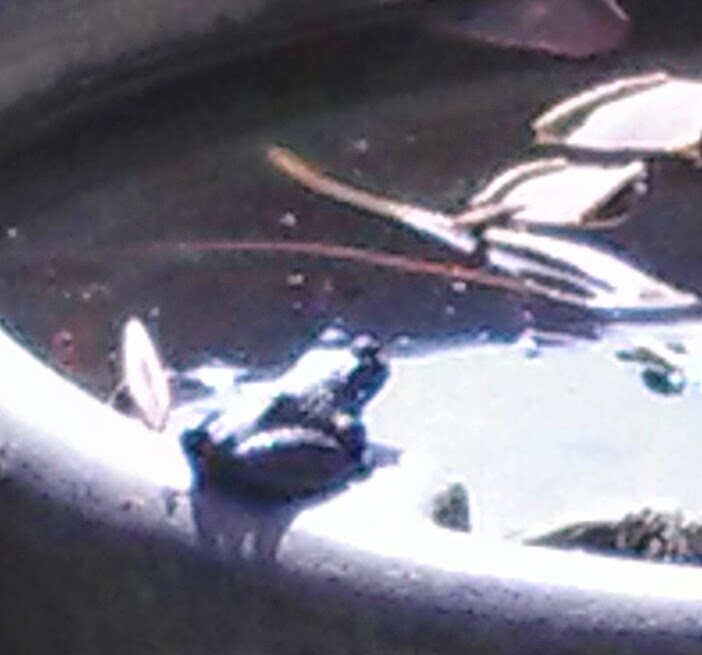 Tuesday morning, he was back in the pond.  As I've been neglecting to bring him beetles the past few nights, he probably went out to foray on his own.  Welfare benefits will resume tonight.

To answer questions I've been getting, I will tell you that I don't know what's wrong with the lower left side of my back.  Doctor doesn't believe it's a muscle sprain.  It's pinched nerves probably due to a ruptured disk.  An MRI would confirm it, but I don't need to spend over $1000 only to be told to keep doing what I'm already doing:  taking it easy.
In my early 30's, I pitted myself against Angus in a trailer loading battle.  I lost.  The double herniated disks in my neck made it so that there was virtually no way to hold my head without pain.  At least, this time, it appears to be a smaller blowout and I have only a few motions that aggravate it.  See?  Could be worse, but gonna get better.
Posted by My Life According To Cole at 5:21 AM 3 comments: