We have a dedicated security detail on the farm.  But, you know how Murphy's Law works?  We have no trouble, not a peep, for 6 months and our new sheriff goes out of town for a few days and that's when some joy riders decide to come onto the property. 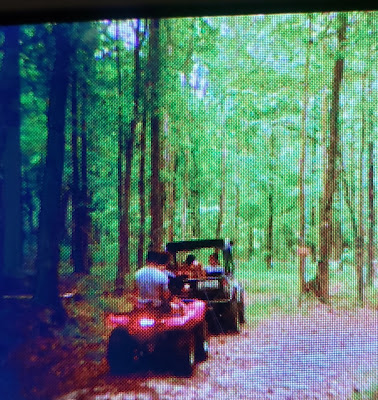 The prospect of resolving another problem at 6 PM after a long, long day was daunting, but we made ourselves a quadruple espresso shot lattes and hit the trails tracking. Night forfeited our further efforts, but we separated and went back out checking every inch of the perimeter for an entry point in the morning.
Flynn on a mule.  Me and my trackers by bicycle. As it is my day off, I opt to mix my cardio, the dogs' exercise and busting some trespassers all in one. 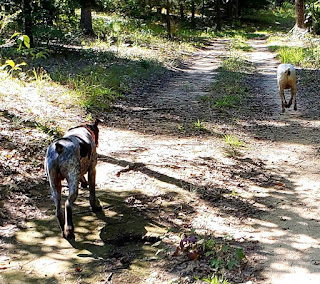 I thought I had a bloodhound, turns out he's a rabbit! 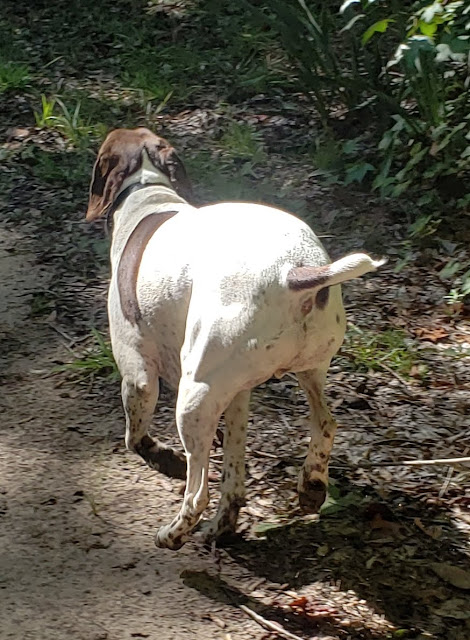 I'm as territorial as a grizzly, so we don't give up until we solved the riddle.  Armed with knowledge of the entry point, Smith and Flynn always get their man.
Posted by My Life According To Cole at 4:25 AM

Excitement at the Farm

We never get bored around here.  Dull days don't exist.  But some days are more exciting than others.  Like when our tree service guys show up.

You know they mean business when they shove a whole pine tree in the chipper!

This year, they brought in the big guns. 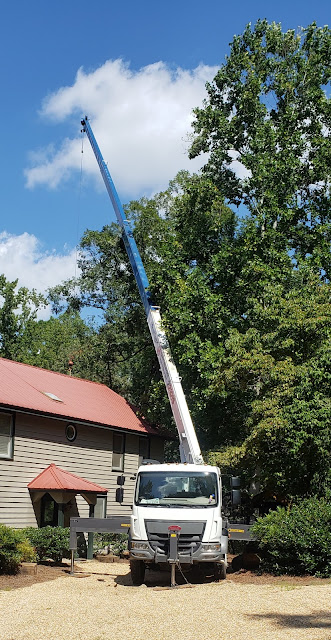 Three ornery trees on the lakeside, beyond the house needed tending.
The largest (of course) had already fallen in the lake and required ingenious uses of cabling to hoist out. 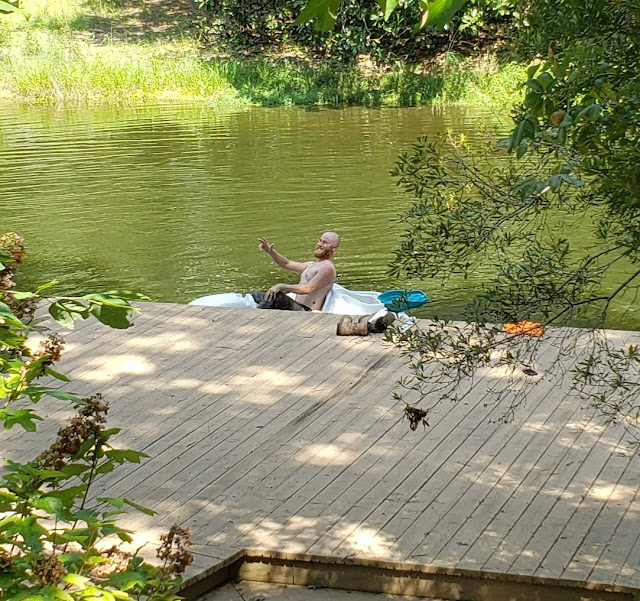 This fine gentleman was the cut man in the lake.
Flynn and I aren't quite sure how the heck they got their small crane around the front of the house, but they are some creative folks.

I think I would've pooped my pants watching them negotiate the 6' wide bank.

Good thing we were otherwise employed helping our vet this afternoon.  Somethings do not need to be witnessed!
We caught the tail end of the day's work:

They make it look effortless.

Up and over the house.

Seeing him do this made me put in a special request...

Life is meant to be savored, thank God I surround myself with like minded people.
I've been dealing with this company for almost 20 years.  Best in the business. 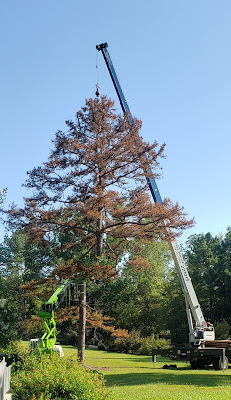 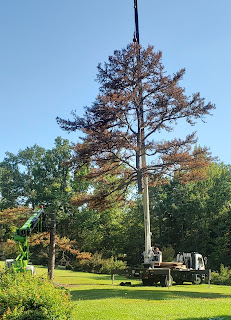 I love my job.
Posted by My Life According To Cole at 5:44 AM

Disproving that old dogs and new tricks are incompatible:

Something that's been on my bucket list for 20 years.  FINALLY!!!

Not as easy as I had imagined.

I must do this again!


Posted by My Life According To Cole at 3:03 AM

Dax has this thing for water... 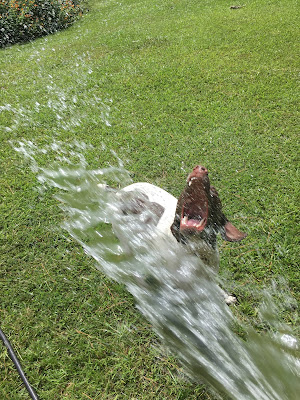 And I have a friend who's a glutton for punishment. 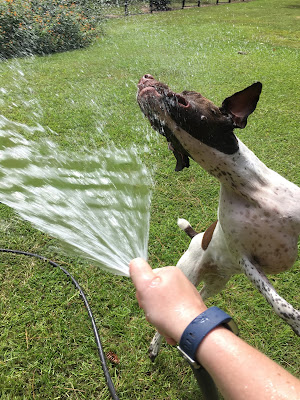 Plus, she takes great pictures. 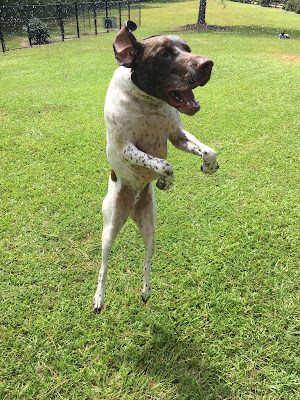 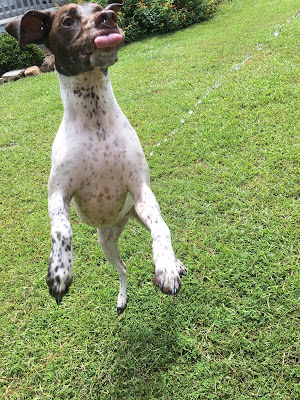 She quickly figured out NOT to get too close to the chompers. 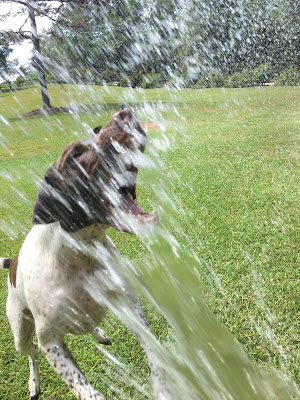 Just a flesh wound she assured me. 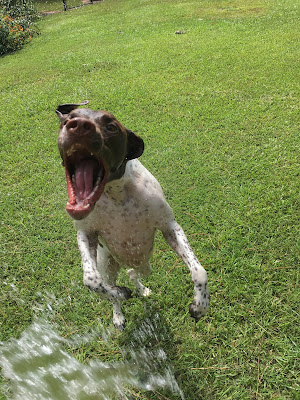 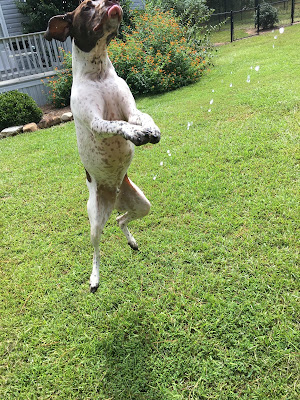 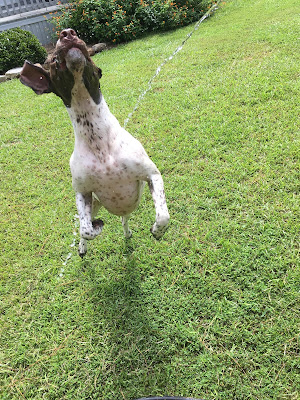 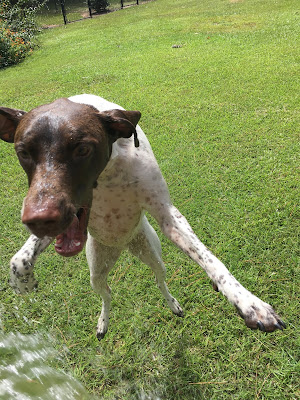 Posted by My Life According To Cole at 3:53 AM

The art of sharing.

More for some than others!

Posted by My Life According To Cole at 8:34 AM

For many months, Peter has been shuttled to Auburn University Vet Clinic  3 times a week for physiotherapy.  News came that we could drop our visits to once a week, if we continued some of the work at the farm. 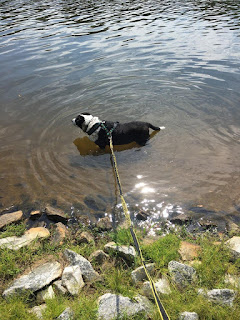 Heather and Lisa, who haven't missed a day of getting him to, or picking him up from PT, were quick to sign up for retraining.  We suspect Peter has wormed his way deep into their hearts too!!! 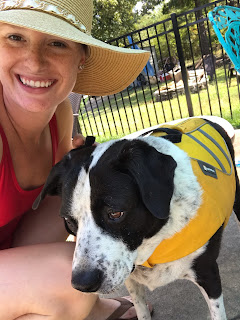 Heather, who lives across the street AND has a pool, has taken over the aquatherapy and agility portion. 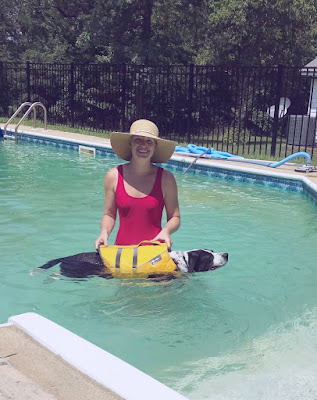 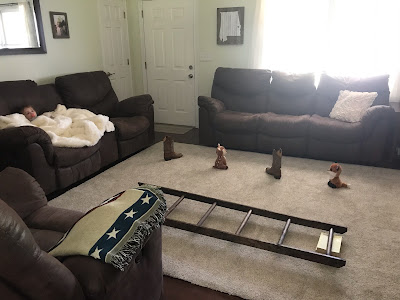 As his physiotherapist, Liz, at Auburn puts it: "Peter does not work for free!"

Lisa has signed up for the cardio hiking portion.  She's devoted, cuz it's August in Alabama!

Petre racking up the miles. 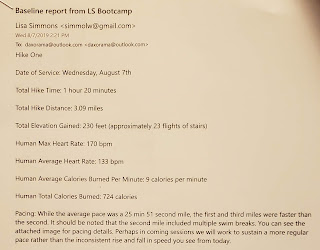 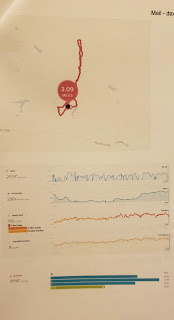 Peter's orthopedic specialist at Auburn called him 'an orthopedic mess' two years ago.  He has so many competing issues, it's hard to know where to start. It would be easier to give up and keep him doped up on pain meds, that's surviving, but not thriving. 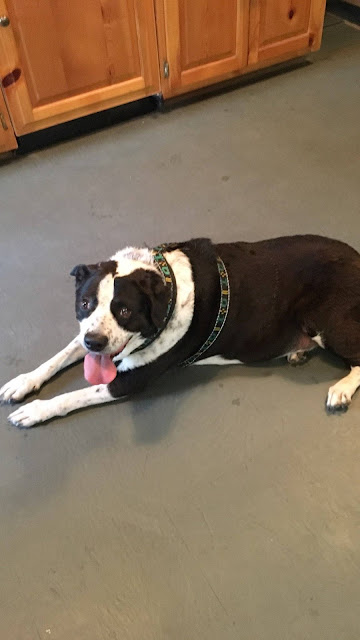 We insist on quality of life around here.  He may be 12-ish and a mess, but he's our happy mess.
Posted by My Life According To Cole at 5:29 AM

Henry Goes to the Chiropractor 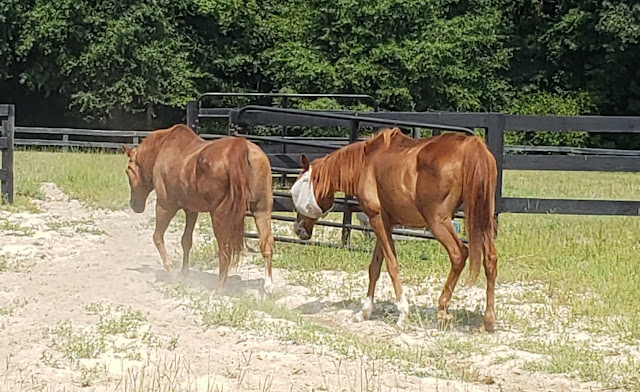 He's still hard at work every day being Roscoe's seeing-eye-horse (Roscoe's cataracts are that bad--but that's another story for another day).
Henry's front knees have been bothering him for a while and most recently, I've noticed a slight dip in his backbone. Time to call the chiropractor.

Dr. Taintor is one of my favorite people at Auburn Vet School, she's performed a miracle orthopedic surgery on my Belgian 10 years ago.

I love these educational visits.

I learn how to do many of the stretches.  And thus we have a game plan to keep Henry's Golden years golden!

Posted by My Life According To Cole at 4:51 AM 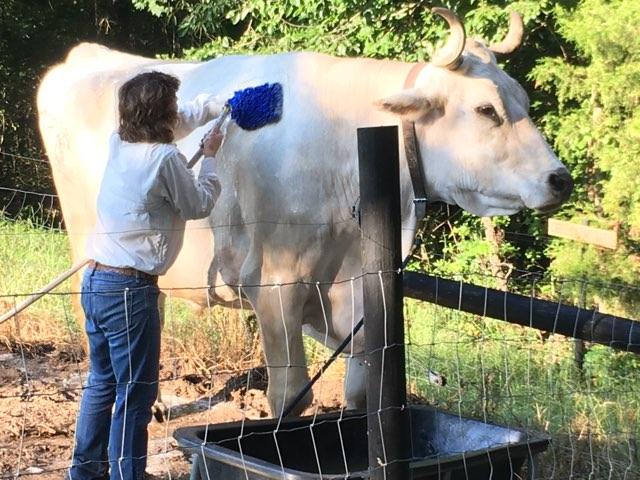 Tradition calls for a bath. 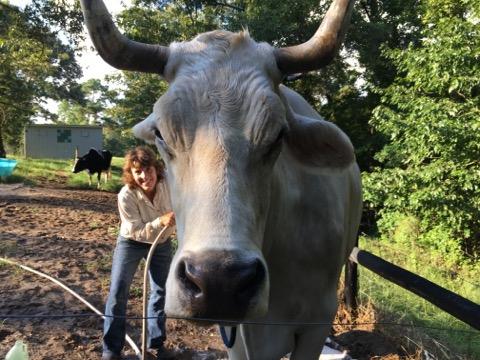 He's my gentle giant.
Posted by My Life According To Cole at 5:15 AM

Quest for the Holy Grail

How did these two end up in Northern Tennessee you ask?

The story begins with hay.

In the South, we grow and feed coastal bermudagrass.  The oppressive heat nixes any chance we'd have to grow anything decent like alfalfa or timothy. Add to the soup the woody textured lower protein content and you have a recipe for colic. Colic isn't the same in horses as it is in babies.  Horses die from it, or in the least. end up spending a week at the vet school costing you $6000.  Been there, done that, couldn't afford the T-shirt. After that little experience 12 years ago, I had been driving to Kentucky to buy timothy hay. I stopped doing it when I moved here because my horses became part of a larger herd.  Plus, I'd found a farmer who's bermudagrass  tested out at 14% protein right around the corner.

Then last year and this year, he let his fields go to seed... 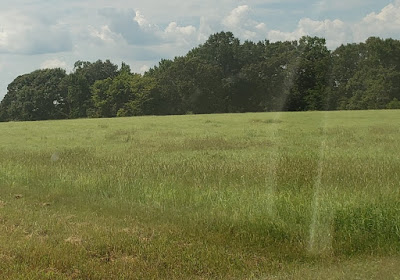 ... before baling (woody), he jacked his prices way up and when I had the hay tested, it scrapped the bottom of the barrel (goat hay).  Granted, part of the problem has been the monsoon weather patterns of the past two years.  Either way, enough is enough. I did my research, I made calls,  I crunched numbers and I found the holy grail... over a mountain in a remote little pocket of Northern Tennessee. Including transportation, pound for pound cheaper, yet far superior hay than anything available around here!!!

Mr. Jones' timothy hay tests consistently at 18-19% protein.  His bales are dense 60 pounders held tight by Portuguese baling twine.  The only twine any self respecting hay farmer should ever use, as he states it. And he never lets his fields go to seed.  If the weather foils his baling plans, he lets the field go fallow and loses that cutting, he does not bale garbage.

I'd been on the phone with him since May, trying to find an opening in the unpredictable weather to have a load delivered.  By the time I met him, it felt like reuniting with an old friend.

Meet him we did because the hay hauler wouldn't deliver without a 3 day window of dry weather in the Southeast, so I rented a 26' Uhaul, packed up a driver, two dogs and a picnic and we hit the road a 3 AM on Monday morning.

We didn't get very far.  By 5 AM, Flynn and I were circling the Uhaul, trying to figure out a way to jimmy the doors open that the dogs had locked.  Staring back at us was the key on the dash.  We scoured the truck stop grounds and dumpsters for anything to use.  Taking turns with a mop bucket handle, then with something more suitable, it only took a little over an hour to break back in.  (No pictures, sorry, phones were also in the cab.)  I called this the beginnings of a good character building day, which has become the farm motto.  Any struggle or hardship is now recognized as an ingredient for a character building day, not a recipe for a bad day.  It's all perspective my friends!

With two 60 lb pointers sprawled out in the passenger seat, it meant the spare driver had only one butt cheek on the seat and the other on the cupholder.  For 907 long miles.

Cannot tell you how much I delighted in the fur overload for over 24 hours.

Can't speak for Flynn.  Good God, the man has the patience of Job.

I spent hours playing with theirs ears.

Many hours mesmerized by how angelic they are sleeping.

Yes, yes, the views were extraordinary.

But, did I mention how adorable the dogs were?

Plus we had a few mini adventures.

We found a pole vaulting practice set up in the middle of a semi abandoned baseball field.

While the dogs played, Flynn and I looked for the pole.  We're getting to that age where breaking a hip is a concern, but not a deterrent.

We also found a knife shop in an ancient stone school house. All manners of knives and every conceivable material to make your own.  Including antlers...  put to better use by the dogs.

I was over the moon when I found an apiary shop.  I know where I'll be ordering my hive supplies now.

Getting home and dropping the hay in the aisle before shooting it up in the hay loft.  Guess what?  The Uhaul was too tall to fit in the barn, we had to walk each bale in.  Another one of those character building moments.
Peter as our mascot.

Now when you walk in the barn, it no longer smells of desiccated dead bermudagrass, the sweet scent of timothy fills your lungs.
Totally worth all the character building. Totally.

Posted by My Life According To Cole at 5:05 AM