Putting a Hit Out On murphy

We joke about Murphy's Law on this road.  The neighbor called to ask if Murphy could come and stay with us for a while since he'd outstayed his welcome with them.

He is the invisible plague, wrecker of schedules, my arch- nemesis and now: on my hit list.

On Monday, Murphy managed to have me tied up with contractors in the morning.  I finally extricated myself from the last one at noon who dolefully informed me that a large varmint had, not damaged, but destroyed the ductwork under one of the houses under my charge.

Somehow, I managed to circumvent Mr. Murphy and get the John Deere tech to come and fix it by 5.  Tuesday is supposed to be my day off, and I dearly needed a full, uninterrupted day to try to catch up on an Accounting Analysis class that has me contemplating suicide.  Yet, a week's worth of rain was predicted and I hadn't finished my bush hogging.

After supper, already in pyjamas, I snuck out to the equipment shed at 7 PM and took off to do a couple hours of cutting.

I was absolutely giddy, Murphy had been evaded, he must've thought me still in my house!

I kept cutting after dark, completing the entire Northern section of trails and meadows.  Talk about snatching victory from the jaws of defeat. I was driving back to the barn feeling quite smug until Murphy met me on the road.

All this monsoon rain we've been receiving the past 3 years had tunneled out a culvert and created a hidden cavern under the gravel road and when I drove over it, it collapsed under us.. After taking the above picture, I attempted to use the phone's camera to see how deep the hole was.  The phone slipped from my hand (we all know Murphy slapped it out of my hand) and it fell 3 feet down into the hole then it cartwheeled another 2 feet into the tunnel. OK.  Let's assess the situation: it's past 10 PM, I have no phone, no flashlight and I'm 3 miles away from the barn.  Time to get walking.  There would've been enough of a moon to see well enough to stay on the road, if it hadn't been for the overcast skies.  Me, in my PJs, used the gravel under my feet as a guide to walk back to get the other tractor.  I gathered chains and 2 flashlights, shovels, I was going to pull the big tractor out by myself.

Murphy decided instead that the night should be one where we snatch defeat from the jaws of victory.  When I returned to the scene, it was obvious that there would be no pulling it out with a smaller tractor.  The tractor was on the verge of flipping over and rolling down a hill.  I used the small tractor to anchor it with chains to keep it from rolling, then I dug furiously around the wheels to level it a bit and win back some stability.  Then I dug into the sinkhole to retrieve my phone. This is the last picture it took at 1 AM before dying:

The next morning, the neighbor answered my mayday.

We drove his bulldozer over and together with the little tractor tugging on it's ROPS bar, we pulled it out.  I'd brought Luke and Vannah to help, but also to use this as a teaching moment.

No harm to the 5420 (that's the big girl's name, little guy called 5210), I just have a big bruise on my elbow from where I was almost ejected out of the tractor seat and managed to catch myself on the ROPS.

So, I didn't get to study Tuesday and I decided Murphy wasn't going to stop me from getting my tasks done, so I was back out in pyjamas after supper, working until dark with my big girl.  Secretly, I was digging Murphy's grave, he's a dead man.

Murphy seemed to have gone back across the road to plague other neighbors and on Thursday, I left the farm to go to an appointment in North Atlanta.  Halfway through the drive, traffic came to a stop.  We crept forward for an hour until passed this: 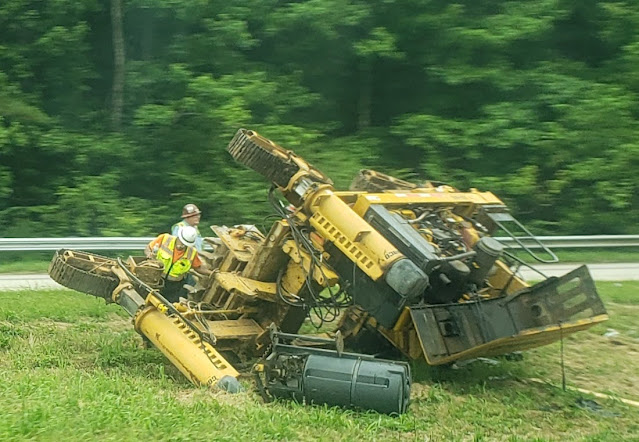 A construction worker had flipped his Tracko over on himself , that was the ambulance I had seen fly up past us on the shoulder of the road.  Gulp.  That coulda been me, except no one would've found me for a few days.

The office refused to let me arrive 30 minutes late for my appointment, so I turned around. 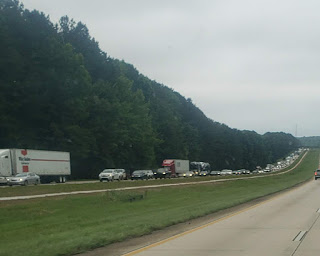 Headed home, knowing Murphy was riding shotgun with me this morning!

Posted by My Life According To Cole at 5:10 AM