When life isn't going my way and throwing an epic tantrum seems imminent, I look around to see who's in more dire straits than I, and try to help.  It's analgesia for my pain and misery. 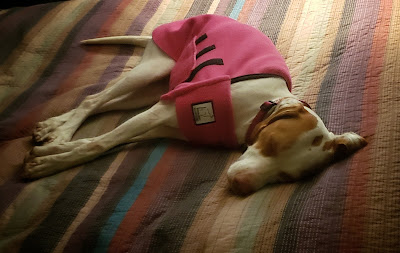 Look who was in worse shape than me.  A two year old English pointer who'd flunked out of hunting training, so they bred her then tossed her.  Underweight and just spayed, she needed a place to recover.  Off to middle of nowhere Georgia did I go to pick her up (I get in so much trouble on my days off, ha,ha,ha) 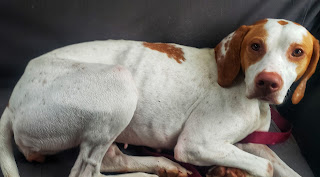 Her name at the hunting plantation was Sue, so I chose a similar sounding name: Suki. 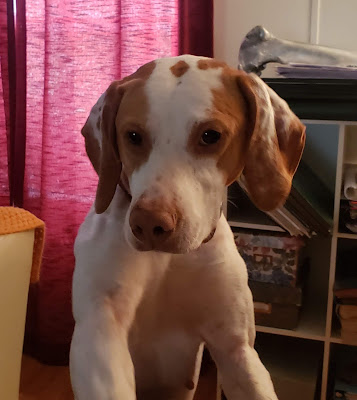 PTSD Suki threw herself off the couch when I sneezed beside her.  Another one who felt the wrath and humans and won't soon forget it. 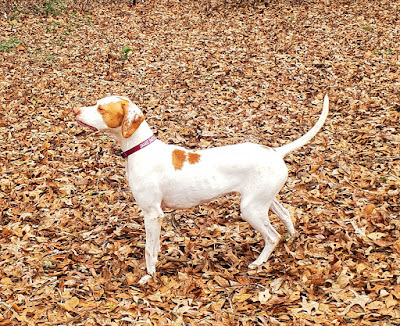 And another one who came here completely wild.  Took only a day for her to learn that lavish affection and treats come with peeing outside.  So, now we're officially a family of 7.

We all fit snugly in the bed, except Pippins who prefers to sleep under the bed.  That's over 400 lbs of dog + me in one in bed. We might go through the floor.

One more at the dinner table. 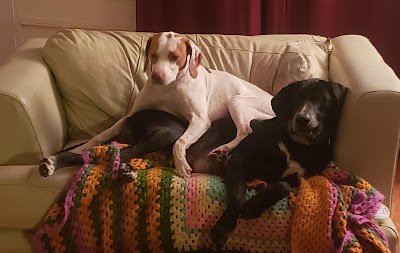 Once Suki came out of her shell a wee bit, it was on.  Connor, Suki and Micah play around the clock.  Dax's sense of entitlement prevents him from frolicking with shelter dogs which he deems to be beneath him.  How did I raise such a pompous arrogant little snot???

He's missing out on so much fun.  Check out the video:

Whenever I think I just can't be of more use to the world, I dig deeper.

It's a reward unto itself.

Anyone need any ditches dug?  I have a nonstop machine.  Check out the video:

Posted by My Life According To Cole at 4:43 AM