Spring hasn't sprung, it has exploded. Weeds and wildlife everywhere.  While weeding a big bed of jasmine, Pete supervised. 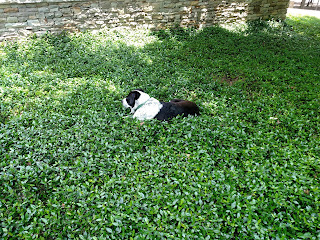 Remaining ever vigilant because I was sticking my hands into snake territory. 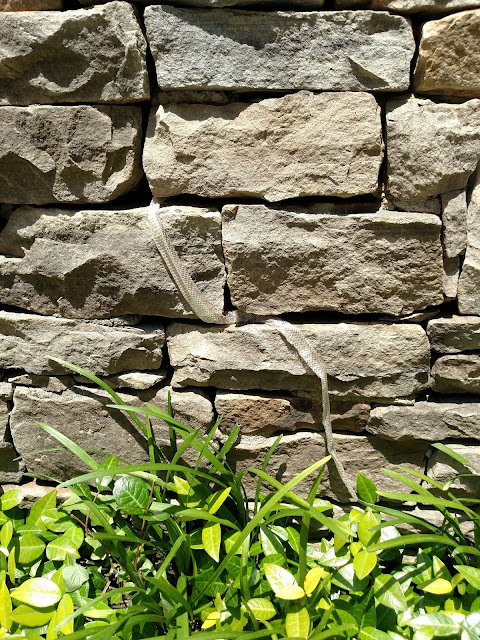 Shed skins served as No Trespassing signs!
I have been remiss about writing for weeks because we had volleys of events at the farm to occupy us.  More catering... 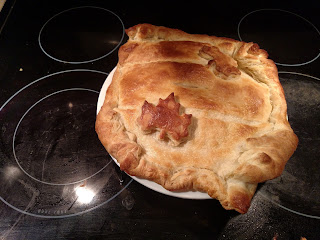 Thanks be to my great kitchen staff: 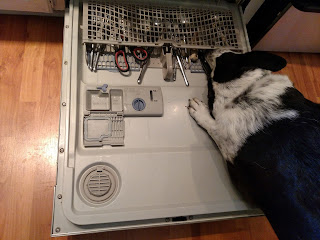 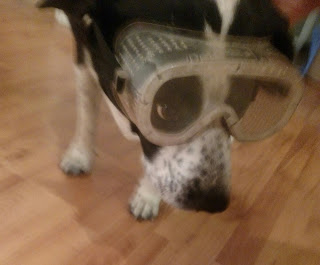 Cole acts as management.  Excelling at doing nothing. 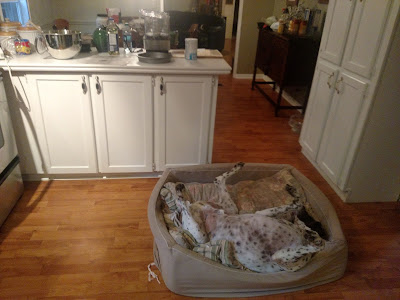 After the last event, my farm accomplice and I are trying to catch up on the unceasing growth of grass and weeds.  Without skimping on our main charges:  the horses. 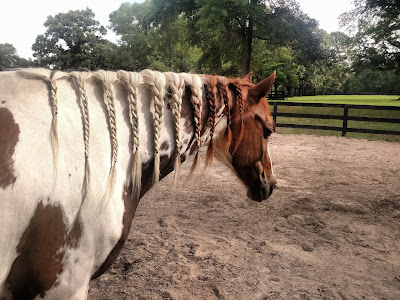 Chief, sporting his Summer braids that are cooler than a thick mane.
We play hopscotch with all the pastures, keeping the horses rotating almost daily.  Permitting the grass to replenish itself and keeping the worm load down.  One of the best pastures is over a mile from the barn requiring us to ride the horses out there in the morning and collecting them at night.  With three riders, 8 horses can be ridden and ponied in one trip .  With one Flynn and one Jamie, it takes two trips or four daily trips.  Unless... unless... you have a brainstorm.
This past Monday, with a mile long list of chores and time pressing, I convinced Flynn  that if I rode Angus in the lead and he rode his horse and ponied two, that the rest of the herd could run free between us back to the barn.  Note to self: unless the Calgary Stampede is calling, let's not do that again.  Everything went swimmingly well until the free horses started galloping through the woods like the Headless Horseman was after them.  We were almost home, but Angus strongly suggested I get off. After rearing up a couple of times, I concurred.
(No pictures, Flynn dropped his camera and it was too hectic.  I guess we need Go Pros or a drone following us).
Worried that Flynn hadn't had enough excitement for the day, I endeavored to make it up to him.  We finished our last mowing job, he was loading up gear between the equipment trailer and the vehicle when I came tearing up the driveway on the big Zero Turn mower.  Why the spirit of Mario Andretti possessed me, I will never know, but I lined myself up to the trailer ramp like it was an Olympic ski jump. Flynn said all he saw coming at him was the bottom of the mower with its three blades.  It would appear, I popped a wheelie as I hit the ramp at Mach 1, the G-force pinning me to the back of the seat making me reach forward with the hydrostatic arms, thus propelling said rocket even faster up the ramp on only its back two wheels.  The first and closest thing I saw when the mower flipped back over was Flynn's face, three shades of pale.  I think one of my first questions to him was: "So, when do I get to borrow your Harley?"  Perhaps not.
I hope he enjoyed the tranquility of my past two days off, because on Friday, I'm baaaack!
Over the past two days, I have wielded a paint brush in attempts to finish the blasted trim on my ox barn. 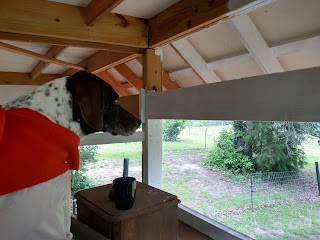 Cole assisted briefly.  Too dangerous for Captain Adventure to be on a second story without screens.  The drudgery of brush painting each rafter 3x was alleviated by the adrenaline rush of hanging out of the building to paint the fascia boards...and by the birds and bees action going on all day below: 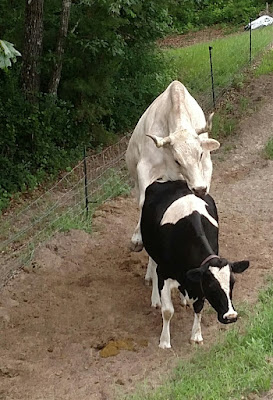 Miss Daphne is in heat again.  When Tommy isn't paying her all his attention, she shoves him around, or me.  She charged me when I came into the barn and knocked the gallon of paint right out of my hand. 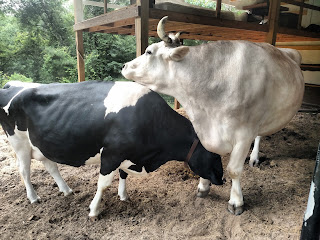 Darling.
When not painting, we play in the flowers.  Cole takes me too literally. 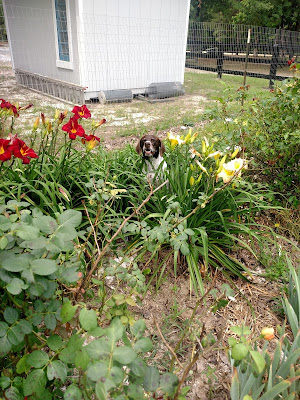 "Excuse me, are you sitting on my daylilies?" 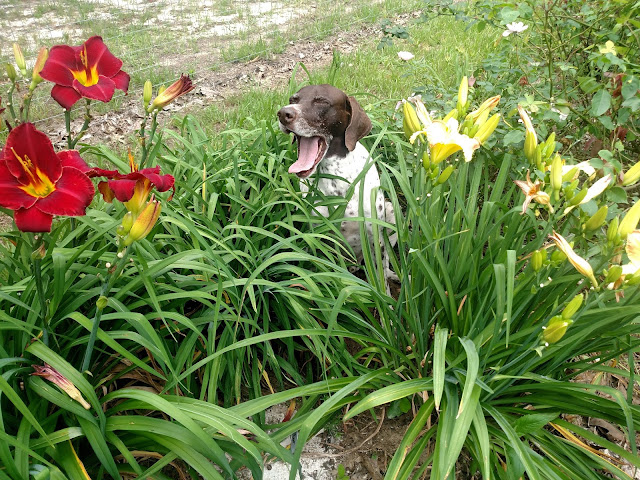 "Maybe".
At least he won't sit on the blackberry bushes! 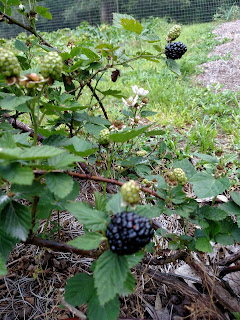 Which have been producing more than just berries...bird's eggs! 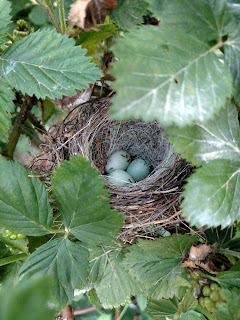 Eggs are being pooped out everywhere around here.  5 nests attached to my house, 3 families of barn swallows in the barn, the trails are being populated with traffic cones to mark where we've seen turtles laying their eggs.  It's like one big nursery. 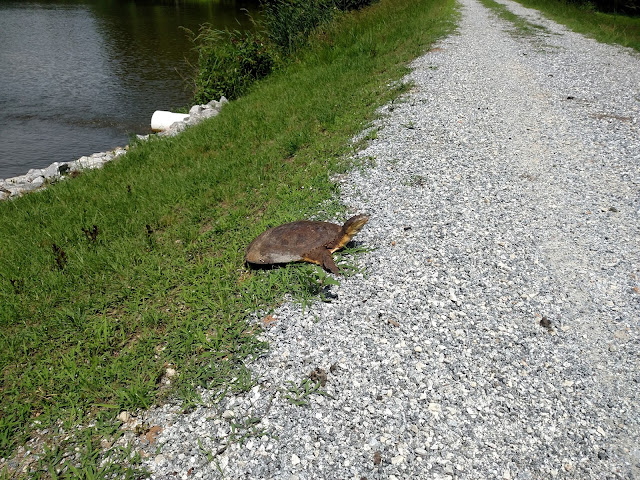 An amazing sighting for me:  my first softshell turtle.  I didn't mean to startle her, she bolted like a wayward Hovercraft back to the water, leaving me to finish covering her eggs.
Not all families get the welcome mat.  Mice need to stay out of doors, or I sic the three amigos on them. 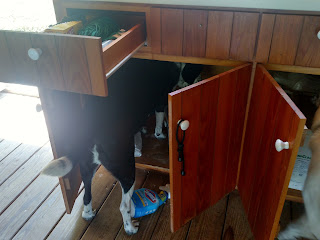 Trained assassins.  I open the cupboard doors and let them do their work. 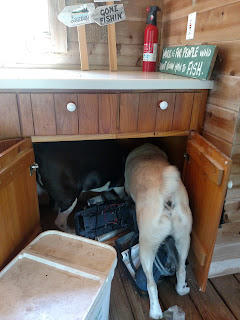 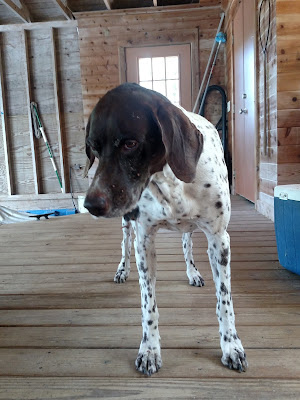 There are few moments which could've been duller.  You got it, they involve Cole.  A few days ago, I awoke all sticky. When turning the lamp on, I'm greeted by the sight of blood on the wall. 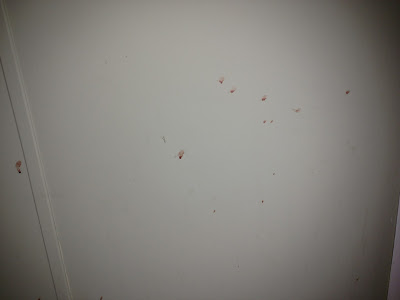 And all over my arms.  I had been sleeping spooning Captain Mayhem, who somehow, in the middle of the night ripped off a bulbous skin tag the size of a marble right off his neck.  I looked for it all over the bed.  We think Pete ate it.  Mr. I-Have-No-Immune-System-Left had managed to open a hole in his skin that I could've tickled his visible neck muscles with the end of my finger.  I packed the wound and fitted him with a hobo getup preventing him from scratching or licking himself to death.  There again literally. 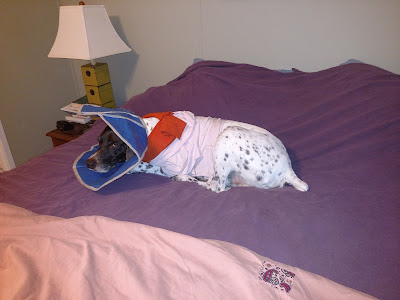 By Day 3, he had graduated to just the scarf sewed to the Tshirt.  What progress we made in that domain hasn't been mirrored by his ever bulging lymph nodes. 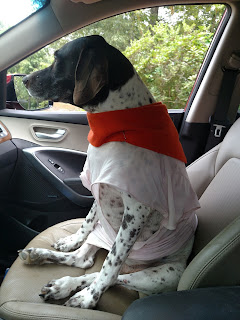 What began in his groin as hard peas has grown to marbles, then cherries, now quail eggs.  Cole doesn't seem to be terribly bothered, but I am.
I'm asking Santa for a better crystal ball this year...


Posted by My Life According To Cole at 2:20 PM